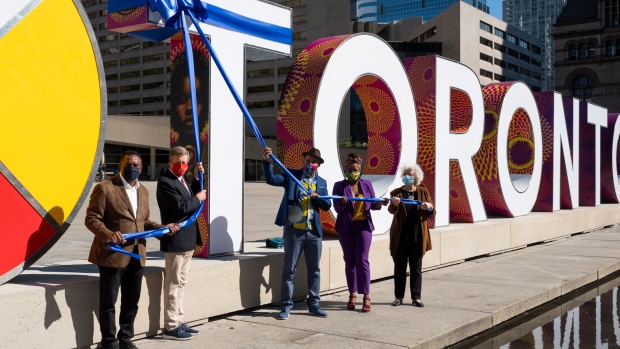 Mayor John Tory and other dignitaries are shown at a ceremony held to unveil the new Toronto sign on Friday. (Twitter/@JohnTory)

The original Toronto sign was initially supposed to last for just a few weeks when it was put up ahead of the 2015 Pan American Games but it soon became an iconic attraction and the city opted to keep it in place.

The sign, however, was not built to withstand the rigours of time and quickly became a money pit that has cost taxpayers more than $400,000 just to maintain.

It features a new vinyl wrap on its outer edges, as well as an improved lighting system. The sign is also more waterproof and graffiti-resistant than its predecessor.

Otherwise it is more or less a carbon copy of the original with the Medicine Wheel and Maple Leaf that were both added to that sign also included.

“If you think it looks much like the old one that was the idea,” Tory told reporters at a ceremony held to unveil the new sign. “When something is working you try to leave it alone.”

The original sign was consistently ranked as one of the city’s three top attractions in surveys completed by Destination Toronto and Tory said that he hopes the new one will continue to “bring a sense of joy to people” while hopefully also being something that “represents a bit of hope in the midst of pandemic.”

The city spent $490,000 on commissioning the new sign, though the total cost rises to more than $761,000 once you factor in the cost of removing the old one sign and paying for a three-year maintenance contract.

“It is going to be the same place it has been for the whole time it has been here which is a place where we recognize milestones and accomplishments and sometimes things that are sad or tragic in the world. But it is a place where people can turn to and know that it is reflecting the thoughts, the spirits, the hopes and the sorrows of people in the city,” Tory said. 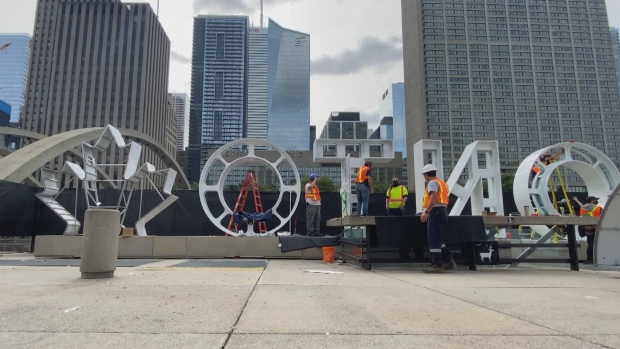 One of the key features of the new sign is a removable vinyl wrap that the city plans to replace once a year.

For the first wrap the city opted to commemorate the United Nations’ International Decade for People of African Descent with a design created by Toronto-based artist Danilo Deluxo McCallum.

His design uses colourful African fabric patterns as well as African cultural symbols such as the Adinkra Sankofa bird, which represents the importance of moving forward by remembering the past.

“The design I created is multi-layered and multi-dimensional as our community is and my aim simply was to capture our brilliance, our boldness and our beauty as Black people,” McCallum told reporters.