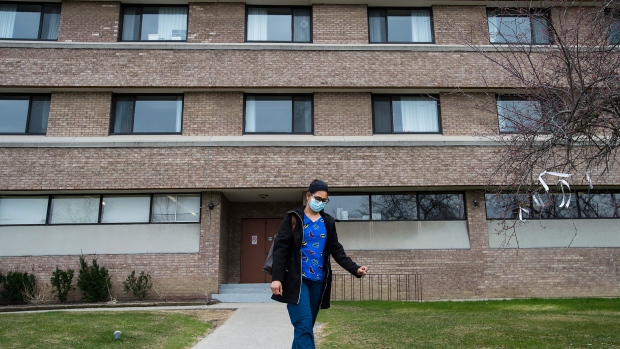 A healthcare worker leaves after finishing her shift for the day at the Eatonville Care Centre in Toronto on Friday, April 24, 2020. THE CANADIAN PRESS/Nathan Denette

Nearly three quarters of Ontario residents polled say they would prefer to be cared for in a non-for-profit long-term care home over a for-profit home if given the choice, a new poll suggests.

The Leger survey reached 1,002 Ontario residents belonging to its online panel between Nov. 7 and 14 and found that among Progressive Conservative voters, preference for admission to a non-profit long-term care home fell to 62 per cent.

For Liberal voters it was 74 per cent and for NDP supporters it was 89 per cent.

“Ontarians have clearly expressed their preference for not-for-profit homes,” Lisa Levin, CEO of AdvantAge Ontario said in a statement sent to CP24.

AdvantAge represents more than 200 not-for-profit and municipally-owned homes and commissioned the poll conducted by Leger.

“It’s encouraging to know Minister Phillips and the Ontario government are listening,” Levin said of the loan guarantees. “Full credit to them for acknowledging the not-for-profit difference and enabling more not-for-profit beds to be built.”

An Ontario study found that during the first wave of the pandemic in early to mid-2020, for-profit long-term care facilities had larger outbreaks of coronavirus among residents vs. non-profit homes and saw more deaths.

“There is clearly a difference in not-for-profit homes,” Levin said in a statement sent to CP24. “They had a better track record during COVID, have higher staffing levels and are accountable to their local communities. That’s why two out of three people entering long-term care select not-for-profit and municipal homes as their first choice.”

The Ford government’s plan to rapidly expand long-term care capacity will continue to involve expansion among for-profit long-term care homes, accounting for roughly half of all new projects in the development pipeline.

Concern over the involvement of for-profit long-term care operators in the sector was highest among women over the age of 55 the poll found.

If the poll was conducted using a probability sampling of Ontario, its results would be accurate +/- 3.1 per cent, 19 times out of 20.