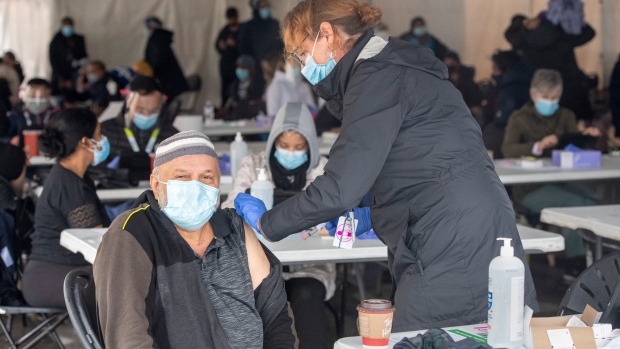 A nurse administers a COVID-19 vaccine at a pop-up clinic at the Masjid Darus Salaam in the Thorncliffe Park neighbourhood in Toronto on Sunday, April 11, 2021. Thousands of lined up for vaccine doses at the mosque in the hard hit neighbourhood. THE CANADIAN PRESS/Frank Gunn

People who live in Toronto and Peel’s COVID-19 hot spots are about four times as likely to have essential jobs in manufacturing and utilities as residents in other neighbourhoods, according to new research.

The Gattuso Centre for Social Medicine at the University Health Network took a closer look at the hot spot postal codes in Toronto and Peel and was able to confirm what many have long suggested – that essential workers, racialized people and those with lower incomes are bearing a disproportionate share of the burden from COVID-19.

Using census data, the researchers found that more than six per cent of residents in Toronto and Peel’s hot spots work in manufacturing and utilities compared to fewer than two per cent in other neighbourhoods. Another 13 per cent of the residents in the hot spot postal codes in Toronto and Peel have essential jobs in the trades, transport and equipment operation. That is more than double the rate in other neighbourhoods. 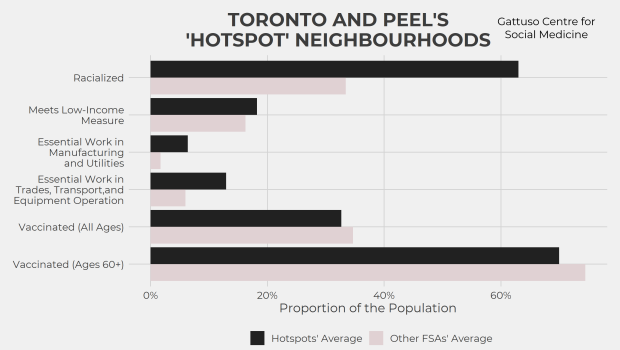 “When we label these areas as hot spots is it is important to know that it is not because there are parties or religious celebrations. These are neighbourhoods that have higher proportions of people in essential work who have been providing all the labour throughout the pandemic to keep everyone else’s life moving along,” Dr. Andrew Boozary, the Executive Director of Health and Social Policy at the University Health Network, told CP24. “I think we need to ensure that the neighbourhoods that are on fire continue to get access to the vaccine and that means we continue to ensure there is supply but also provide the resources and staffing to ensure there are a number of different ways to ensure that people in these hot spot neighbourhoods can access the vaccine, whether it is at work, at home or at pop up clinics.”

The Ford government has been allocating 50 per cent of all vaccines to hot spot neighbourhoods over the last two weeks but will return to a per-capita distribution model next week.

Boozary said that he believes that decision should be reconsidered based on the findings of the research, which he says “underscores” the need for a more targeted approach.

“I hope it is just more data to shift the onus from people in communities to policies and policy responses that are going to be useful,” he said. “It has been very encouraging over the last few weeks to see the rapid uptake of vaccine in these neighbourhoods led by community organizations but it also underscores that this is about insufficient policy and starving of resources; not deficiencies in people or communities.”

According to the research, residents in hot spot neighbourhoods in Toronto and Peel are about twice as likely to belong to racialized communities. They are also slightly more likely to be lower-income.

Some of the disparities in Toronto’s so-called “Sprint” neighbourhoods, which have been deemed most at risk, are even more pronounced.

The research found that more than 70 per cent of the residents in those communities were racialized and about 10 per cent worked essential jobs in manufacturing or utilities. 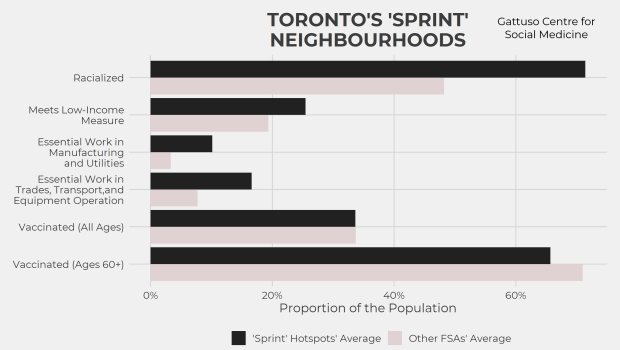