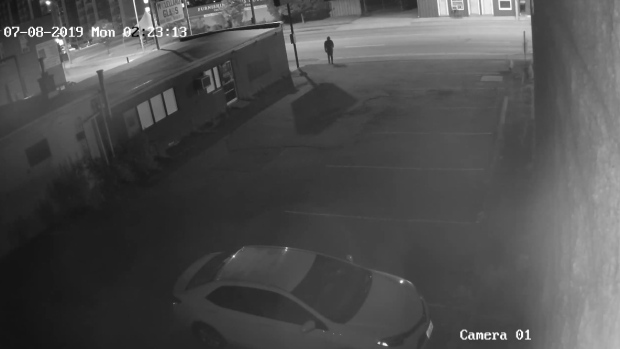 A still image from surveillance footage released June 1, 2021 in connection with the 2019 murder of Hamilton man Coby 'Kareem' Carter is pictured. (Handout)

Ontario Provincial Police have released new surveillance video in their investigation into a 2019 shooting that left a 22-year-old Hamilton man dead.

The shooting took place in the 100 block of Colborne Street West in Brantford on July 8, 2019.

At around 3:25 a.m., Brantford police were called to the area, where they found 22-year-old Coby “Kareem” Carter dead at the scene.

Investigators said Tuesday that they are releasing a short surveillance video that shows a person of interest in the investigation. Another person, a potential witness, is also visible in the video.

The province is offering a $50,000 reward for information leading to the arrest and conviction of those responsible for the murder.

Police are asking anyone with information to contact OPP, Branford police, or Crime Stoppers anonymously.