Newly unsealed video shows hours of footage of police interviews with the man now on trial for the alleged murders of two teenage girls in Oshawa.

The video, released Thursday, shows the now-47-year-old Adam Strong asking for a cigarette and ordering fast food as he meets with police in 2018, nearly a year after being taken into custody and shortly after being charged with two counts of first-degree murder.

Strong was charged with committing an indignity to a body in December 2017, after the remains of Rori Hache were discovered in his basement apartment.

The torso of the pregnant 18-year-old was found in Lake Ontario by a fisherman in September 2017, the month after she went missing.

A plumber then called police in December when he allegedly found human remains clogging up the drain of Strong's apartment.

Searching his apartment, police found the DNA of another woman, allegedly that of Kandis Fitzpatrick, who went missing back in 2008.

"I understand I'm in a lot of trouble," Strong tells the officers in the interview room. 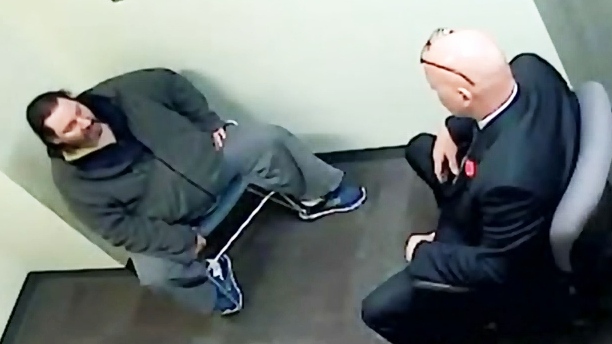 Det. Paul Mitton tries to get details about Hache's death, but finds himself speaking with an interviewee who wants concessions.

Strong tells Mitton that in exchange for "spilling the beans," he would want to be "as comfortable as I can in jail. Not like a hundred thousand dollars like Picton, but like an allowance. I don't know, like internet access. I don't have anybody who's going to buy me a TV."

Mitton tells him that's not how things work.

In the interview, Strong only admits to dismembering Hache and trying to dispose of her body.

"Tried to, but unfortunately, it was foiled by inadequate plumbing and that is a freakin' shame for me, for me," he says.

In the interview, played over in court this week, the suspect also tells the detective that he'd like to send condolences to Hache's parents.

"I don't know how appropriate this is, but I would like you to pass on my condolences to her mother and father," Strong says.

He also tells Mitton he doesn't feel things like other people do.

The interview lasted for 11 hours. The trial continues this week.