Nexus applicants can shuffle off to Buffalo as Canada, U.S. expand pilot project 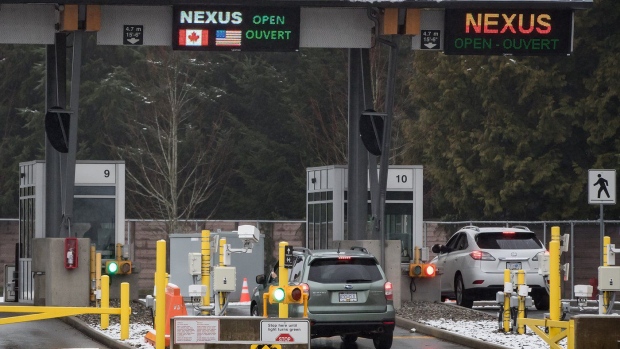 A motorist scans a Nexus card as another speaks with a Canada Border Services Agency officer at a primary inspection booth at the Douglas-Peace Arch border crossing in Surrey, B.C., Wednesday, Feb. 5, 2020. THE CANADIAN PRESS/Darryl Dyck

WASHINGTON - An experimental bid to rescue the troubled Nexus trusted-traveller program between Canada and the United States has expanded to the Peace Bridge.

Nexus applicants in Canada can now sit down with border agents on opposite sides of the link between Fort Erie, Ont., and Buffalo, N.Y., New York congressman Rep. Brian Higgins said Thursday.

That's a departure from what used to be the standard practice of being interviewed by U.S. and Canadian agents at the same time - a process that hasn't taken place on Canadian soil since before the pandemic.

The new procedure at the Peace Bridge crossing is an extension of a pilot project that began in late September at the Thousand Islands crossing between Alexandria Bay, N.Y., and Lansdowne, Ont., just east of Kingston.

In both locations, Nexus applicants in Canada submit to two separate interviews: first on the Canadian side with a member of the Canada Border Services Agency, then with U.S. Customs and Border Protection officials on the American side.

“Border management has gotten more complicated than it has to be,” Higgins said in a statement.

“The U.S. and Canada are longtime friends with interconnected economies. We need to find ways to break down the barriers at our border to better support the flow of people and goods between neighbours.”

The pilot project is considered a partial, short-term solution to the bilateral impasse that has led to U.S. agents refusing to staff Nexus enrolment centres on Canadian soil over what they consider inadequate legal protection.

It's an “important stopgap,” Higgins said, but the fact it's needed at all is proof that the two countries have a long way to go before Nexus is back to its pre-pandemic strength.

He called it “a reminder that the U.S. and Canada still need to fulfil the potential of the agreement reached in 2015 to facilitate Nexus application procedures in a seamless way to the benefit of both Canadians and Americans.”

The backlog of Nexus applications in Canada reached as high as 350,000 earlier in the fall, but has been slowly declining since the pilot project began. The Canada Border Services Agency officials did not immediately provide updated numbers.

Higgins said once the project is fully underway at the Peace Bridge, as many as 500 applications could be processed there each week.

It's a far cry from how Nexus interviews have traditionally been conducted in both countries, with applicants sitting down for an in-person interview that's jointly conducted by officers from the two agencies in the same room.

That process has been going on as normal in the U.S. since April, when the 13 Nexus centres south of the border reopened for joint interviews after a two-year pandemic-driven hiatus.

Customs and Border Protection, however, won't send agents to staff centres in Canada without being guaranteed the same legal protections they enjoy on U.S. soil - a condition the federal government in Canada considers a non-starter.

Officials with CBP have so far refused to comment publicly on the dispute.

The impasse turned into a full-blown diplomatic row in October when Kirsten Hillman, Canada's U.S. envoy, said the program was being “held hostage” to a unilateral attempt to renegotiate the bilateral preclearance agreement under which Nexus was established.

Business leaders and elected officials in both countries have been pressing the two sides to find a solution, describing Nexus as a critical component of the cross-border trade and commercial ties between Canada and the U.S.

This report by The Canadian Press was first published Dec. 1, 2022.