Police say that more students of a Catholic high school in Pickering have come forward saying their yearbook quotes were tampered with after a young Black man found that his tribute to his grandmother had been replaced with a racist comment.

After the comments were discovered earlier this month, all students at St. Mary Catholic Secondary School were asked to return their yearbooks to the school at the principal’s request.

Upon doing so, police said that at least nine students reported that their submitted quotations were also changed without their knowledge.

Of the other quotations “tampered” with, one had racist overtones, police said.

“These nine students were a mixture of female and male, from various cultural backgrounds,” police said in a news release issued on Friday.

The investigation began after the Durham District Catholic School Board contacted police about the racial slur published beside the photograph of high school graduate Joshua Telemaque, which they described as "hurtful" and "malicious."

His aunt took to Facebook over the weekend to express her anger and frustration over the edit, which saw Telemaque’s submitted yearbook entry honouring his late grandmother changed to a racist phrase referencing Harambe, the gorilla that was shot at the Cincinnati zoo in 2016. 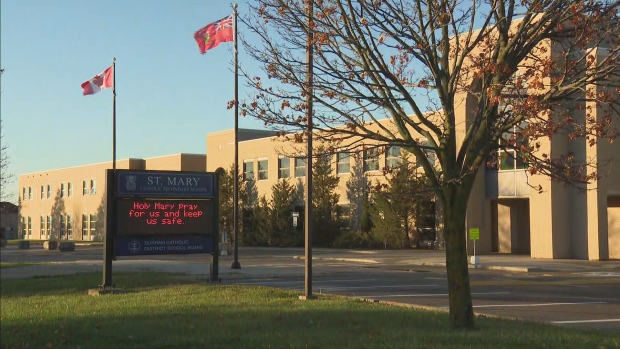 Telemaque told CTV News Toronto that he could not “describe the amount of hurt" he felt after he picked up his copy and looked inside.

"I felt destroyed and heartbroken. It affected me in a lot of ways, but it's just something that I don't want anyone to feel,” he said at the time.

Police say they have not yet determined who is responsible for tampering with the quotes and said that officers with the West Division Criminal Investigations Bureau (CIB) have been speaking with members of faculty and students.

“Our investigation continues and we would like to speak with anyone who knows the person(s) responsible,” police said.

Durham District Catholic School Board said they are unable to comment on the development, citing the active police investigation.