No charges to be laid in death of Regis Korchinski-Paquet: SIU

The province’s police watchdog said Wednesday that no charges will be laid against responding officers in the case of Regis Korchinski-Paquet, the 29-year-old woman who fell to her death from a High Park Avenue balcony earlier this year.

Officers responded to 100 High Park Avenue on May 27 after the young woman’s family called police.

Her mother told reporters that Korchinski-Paquet was suffering a mental episode and that she wanted officers to take her to CAMH.

While being escorted out of the building, Korchinski-Paquet said she had to use the bathroom and returned to her apartment. Her family has said that she was followed in by several officers and that moments later, she fell to her death from the balcony.

The Special Investigations Unit has been probing the circumstances surrounding Korchinski-Paquet’s death since then and finally released its results on Wednesday in a lengthy report.

“Based on his review of the evidence, the Director of the Special Investigations Unit, Joseph Martino, has determined there are no reasonable grounds to believe that any of the officers committed a criminal offence in connection with Ms. Korchinski-Paquet’s death,” the SIU said in a statement.

The investigation included interviews with one subject officer and six witness officers. The agency also interviewed 15 civilian witnesses, including Korchinski-Paquet’s mother and brother, who were in the vicinity at the time. A written statement was also obtained from Korchinski-Paquet’s father, who she was speaking with on the phone moments before the fall.

“The investigation further benefitted from a review of scene photos, 911 call recordings, audio recordings from In-Car Camera Systems of police cruisers, security camera video recordings from the apartment building in which the incident occurred, records from the TPS and two post-mortem reports,” the SIU added in its statement.

The SIU report lays out in detail the events that occurred before officers attended the home.

A total of five 911 calls were made by Korchinski-Paquet, her mother and brother.

The first of the five calls was placed at 5:13 p.m., when her mother, Claudette Beals-Clayton, told the dispatcher that her daughter and son were fighting.

Beals-Clayton said that her daughter was throwing bottles. She told the dispatcher Korchinski-Paquet had had a seizure earlier in the day and that the two had been fighting since. She said she wanted someone to come and take both of her children away.

“I seen it too many times and I can’t deal with it no more,” she told the dispatcher.

She described an ugly fight in which bottles and punches were thrown and knives pulled out.

“I just want the police to come and I don’t care where you take either one of them but I don’t ever want them back here. None of them. I don’t care where they go to live but they’re not coming here. I’m done,” the exasperated Beals-Clayton told 911 after leaving her own home to avoid the fight.

At 5:15 p.m., Korchinski-Paquet placed her own call and told the dispatcher that her brother had attacked her. She said she couldn’t breathe and needed an ambulance.

A short time later her brother, identified in the report as Civilian Witness #2, called and said his sister had “initiated the assault with two knives” and that he had defended himself.

He told the dispatcher that he was in the stairwell while his mother was in the corridor and his sister was in the apartment with two knives and broken bottles.

“CW #2 said this was not the first time this occurred, and that they fought over the television volume being too loud. He said his sister had two epileptic seizures that day, and that they have to leave the apartment after she experiences seizures so she can calm down. On this day, she had not calmed when they returned,” the report states.

He told the dispatcher that his sister was epileptic and had been smoking weed for her seizures, but was not on any other drugs and did not have any other diagnosed mental issues.

At 5:22 p.m., Korchinski-Paquet placed a second call to 911 and said she was being attacked by both her mother and brother.

“When asked if anyone needed an ambulance, Ms. Korchinski-Paquet said, ‘I’m not sure. I can’t even speak right now but my mother she just attacked me and so did my brother, ’” the report states. “She said when she told her brother to turn off the television, he jumped up and started punching her in the head and choking her. When asked if any weapons were involved, Ms. Korchinski-Paquet said, ‘Yes. They – they – they pulled out knives.’”

She added that her mother and brother had “been drinking all morning and smoking weed” and that she herself was only taking magnesium for her seizures.

The final call was placed by Korchinski-Paquet at 5:30 p.m. when police were already on scene.

She reiterated that she had been attacked and then said she needed to pee before ending the call.

At 5:32 p.m., the subject officer reported that officers were on-scene with two individuals, that no knives were present, and an ambulance was not required.

Seven minutes later one of the witness officers reported that Korchinski-Paquet was “scaling the balconies here.”

Around 35 seconds after that, he added “The daughter made her way out to the patio and climbed over the railing and it appears she’s trying to get to the neighbour’s unit. She’s hanging on the side of the patio.”

At 5:41 p.m., three separate calls to 911 reported seeing someone fall from a balcony.

Korchinski-Paquet was pronounced dead at the scene at 6:05 p.m.

Two autopsies subsequently determined that Korchinski-Paquet died from the fall.

The second autopsy, which was requested by the family, found that marks located on her upper left arm may have occurred during a struggle and that she also had a blunt force injury on her back that likely occurred before impact with the ground. However the autopsy could not conclusively determine how those injuries occurred.

The lengthy SIU report found that despite early allegations that she had been pushed, Korchinski-Paquet was alone on the balcony when she fell.

“The evidence indicates that no one other than Ms. Korchinski-Paquet was on the balcony when she scaled over the railing and attempted to sidestep along the outer ledge over to her neighbour’s balcony, lost her balance, and fell,” Martino wrote.

Martino also found that officers had a lawful basis to temporarily detain Korchinski-Paquet and her family and to control their access to the apartment while they tried to sort out who was the victim and aggressor in the dispute that had precipitated the call. However he stopped short of saying the officers should have more formally apprehended Korchinski-Paquet to prevent her from harm.

Responding to the report Wednesday, the family called its findings “disgusting.”

“It’s unjust and we’re not ok with it and we don’t believe them and that’s our true beliefs,” she said, flanked by family members, supporters and lawyers.

“People need to be held accountable for their actions but they’re not.”

Korchinski-Paquet’s brother added that “If Toronto police didn’t follow my sister into the apartment, she would still be alive. She’d still be here.” 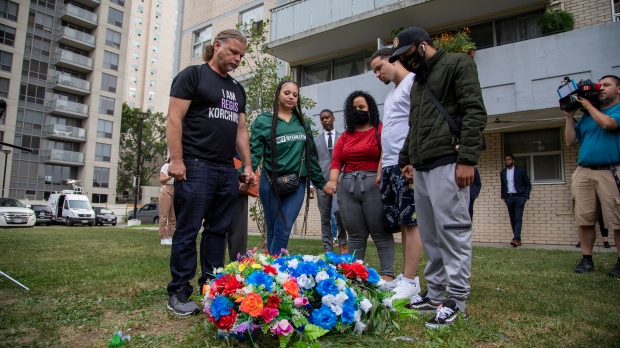 Lawyers for the family acknowledged that the SIU report was thorough, however they took issue with a number of points, including the findings of the Ontario autopsy and Martino’s legal analysis.

“The decision of the SIU not to lay any criminal charges or have any criminal liability in the situation is disappointing,” lawyer Knia Singh said. “Yes the SIU report was very thorough. However it did leave out some key elements that the public must be aware of.”

Singh pointed out “serious discrepancies” between the first and second autopsies and said there was evidence in the second to indicate possible strangulation before Korchinski-Paquet’s fatal fall.

He said the legal analysis in the report fell short as well.

“The legal team and the family believe there was a duty of care from the moment the officers cross that threshold into that apartment,” Singh said.

He said the analysis of what happened before police entered the apartment was “not relevant.”

“What is relevant is what happens when the police enter that apartment. And in our opinion that is a contributing factor to Ms. Korchinski-Paquet’s death,” Singh said.

He said in his view, there are grounds to lay charges of failure to provide necessaries of life and criminal negligence causing death.

“Failure to provide the necessaries of life—it’s triggered by detention and clearly Regis was in detention in the hands of the police,” Morton said.

He said the charge of criminal negligence causing death is triggered by the duty of care on police officers.

“Permitting her to be anywhere near the balcony entrance was criminal negligence,” Morton said.

In his analysis, Martino said he was “not satisfied there was a lawful basis to assume complete control over Ms. Korchinski-Paquet’s movements via an arrest” and noted that there was some uncertainty among those responding to the call as to whether they might be able to apprehend her under the Mental Health Act.

While Martino acknowledged that epilepsy can have mental as well as physical manifestations, he said they were not sufficient to clearly prompt the officers to question her mental health.

“I cannot fault the officers for failing to take Ms. Korchinski-Paquet into custody prior to her scaling the balcony railing,”Martino wrote. “She had not given them any indication that she wished to harm herself and was professing to be the victim of an assault at the hands of her brother. There is no doubt she was irate and perhaps even behaving in a disorderly manner in the presence of the police, but that would not have been unusual for a person claiming to have been assaulted and demanding the police take action.” 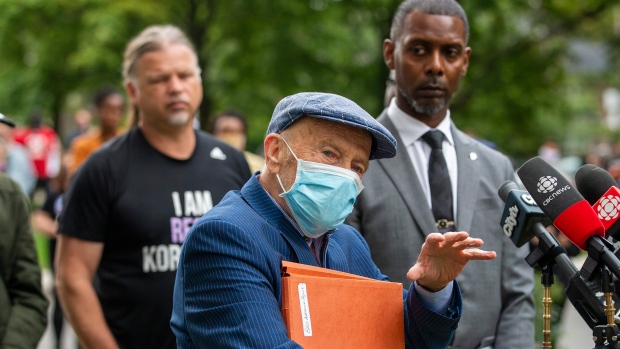 “We’re asking for everything. I think the public has a right to know whether the SIU has investigated well enough and whether the director has correctly applied the laws,” Morton said.

Singh said he was pleased to see the SIU acknowledge that race was relevant as Korchinski-Paquet was both Black and indigenous, however he said race does not form not “the crux of the case.”

Singh also noted that there were “too many barriers to evidence and information on behalf of counsel and information that enable them to make a clear and concise analysis.”

Interim Toronto Police Chief James Ramer also responded to the report Wednesday and said he fully supports its findings, though he acknowledged that there was no victory for anyone.

“Although our officers were cleared, a finding that I fully stand behind, there was a no-win in this tragic situation for anyone,” Ramer said at a news conference.

“A young woman lost her life. Their family lost her daughter, sister, and cousin. The service again offers its deepest sympathies. This is a profound event for the officers involved and for the Toronto Police Service.”

Toronto police will now be conducting their own separate investigation into the incident and will present its findings to the Toronto Police Services Board.

Asked if there was anything more that officers could have done in his view, Ramer said the responding officers did their best.

“I think we tried our best on that day and we will examine everything we can to see if we can do better,” he said.

He noted that TPS is working with the board to try to develop better strategies around people in crisis.

Regis Korchinski-Paquet is seen in this undated photo. (Source: Facebook)