No plan to dismantle encampments, city says as advocates call for increased supports for homeless 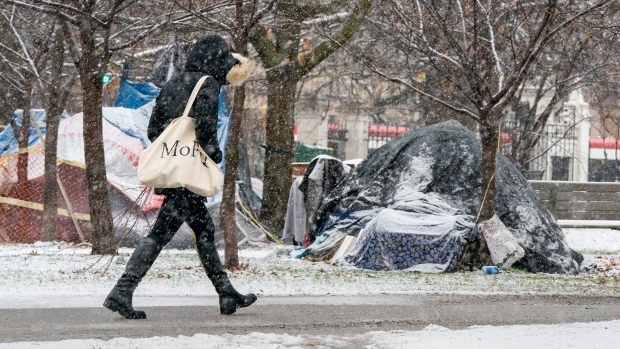 A pedestrian walks past a snow covered tent encampment in Trinity Bellwoods park in Toronto on Sunday November 22, 2020. THE CANADIAN PRESS/Frank Gunn

Amid a campaign aimed at stopping the dismantling of homeless encampments, the city says it currently has no clearings scheduled.

Advocates for those experiencing homelessness have been calling on the city to boost its support for the homeless population, especially in light of the COVID-19 pandemic.

In an online campaign over the last few days, a number of posts have suggested that the city is about to clear out homeless encampments and evict people living there.

Using the hash tag, #NoEncampmentEvictions a coalition of advocates, including a number of high-profile actors and musicians, have implored the city to halt planned evictions and increase needed services for the city’s homeless population.

However in a statement to CP24.com Friday evening, city spokesperson Brad Ross said the city has no immediate plans to clear out any encampments.

“It’s unfortunate there is a campaign like this that is circulating misinformation and unnecessarily causing homeless people undue worry,” Ross said. “No encampment clearings are scheduled. We continue to offer people, on an individual basis, safe indoor space.”

The city has said previously that it will only clear encampments once everyone at that location has been offered safe indoor space and that a notice would then be issued to give people time to collect their belongings.

However while there are more than 6,000 shelter spaces in Toronto today – some of them added over the summer to create safer spaces due to the pandemic – the city acknowledges that the system is currently operating at capacity most nights.

“Despite all this work and public investment, demand for shelter remains higher than ever before, and the system is at or near capacity most nights,” the city said in a lengthy statement Thursday. “This is why the City continues to open new space and has renewed calls for government partners to continue the cooperative work to implement more housing solutions.”

In its statement, the city also sounded an alarm about the dangers of makeshift shelters and pods that have sprung up at encampments, saying they “represent a significantly increased danger to those who use them and anyone in the vicinity if these structures were to be involved in a fire.”

The city said it will be adding 620 additional shelter spaces this winter, as well as an additional warming centre for days when there are extreme cold weather alerts.

In a statement released Friday afternoon, several NDP MPPs from Toronto called on the provincial government to do more to help Toronto’s homeless population, warning that “winter is coming and people have nowhere to go.”

“The COVID-19 pandemic has exacerbated Toronto’s housing and homelessness crisis. Many people who experience homelessness are Black, Indigenous, and racialized people—the same communities most impacted by COVID-19,” the statement read. “As the number of cases of COVID-19 in Toronto continues to surge, emergency shelters are operating at capacity, and respite and drop-in centres are stretched thin.”

The MPPs called for a provincial moratorium on evictions, funding for new rent-geared-to-income rental units and immediate shelter and hotel spaces, as well as investments in overdose prevention, mental health and harm-reduction services.