No serious injuries after wheels fly off UPS truck, hit convertible on Hwy. 407 in Markham 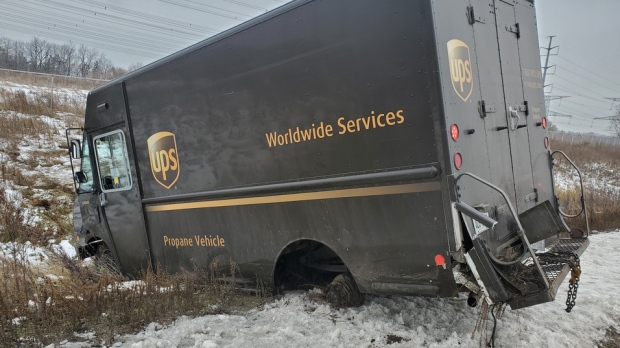 A UPS truck lost its wheels on Highway 407 near Leslie Street. (Twitter/ @OPP_HSD)

No serious injuries were reported after a set of dual wheels came flying off of a UPS truck and struck two vehicles on Highway 407 in Markham.

The incident occurred in the eastbound lanes of the highway near Leslie Street at around 11 a.m.

OPP Sgt. Kerry Schmidt said the wheels separated from the truck and went bouncing down the highway toward oncoming traffic.

“Those wheels they bounced across the 407 eastbound lanes and ended up way off in the distance, striking a westbound… convertible. That vehicle ended up going into the ditch (and) rolling over several times,” Schmidt said. “Amazingly the driver was not injured.”

Schmidt said the wheels struck another vehicle, which sustained only minor damage as a result of the collision.

“Fortunately no one was seriously injured or killed but we certainly have seen that in the past,” Schmidt said.

“Obviously (it was) a pretty scary experience for the driver, even scarier for the vehicle going the opposite direction as they see a set of wheels come bouncing toward them.”

He said once the highway is cleaned up, officials will be looking into why the wheels came off.

Schmidt said the tires and rims had been removed two weeks ago so the rubber could be replaced.

“This is the time of year where we typically see an increase of wheel separations because people are installing their winter tires,” Schmidt said.