No singing or dancing allowed as Ontario reopens restaurant patios 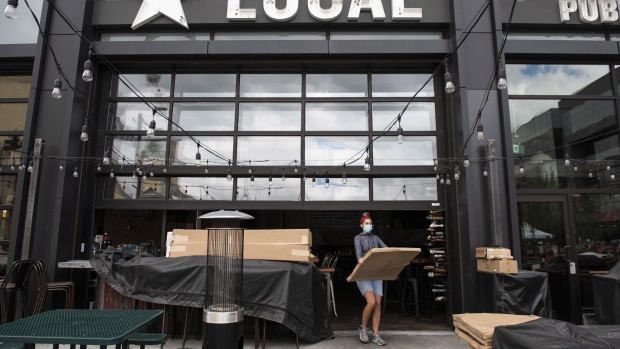 A staff member at Local Public Eatery at Lansdowne Park prepares new patio furniture, purchased before the COVID-19 pandemic forced restaurants to close their doors to patrons in Ottawa on Sunday, May 31, 2020. THE CANADIAN PRESS/Justin Tang

TORONTO -- Whistle while you work to help Ontario bounce back from the COVID-19 pandemic -- but please, don't sing.

That's the gist of the message coming from the provincial government, which has included explicit bans on singing -- even dancing -- in parts of its plan to reopen businesses temporarily shuttered by the deadly outbreak.

The guidance prepared for restaurants and bars states that both singing and dancing are banned in the outdoor seating areas where customers are currently allowed to gather in limited numbers.

Documents state singing is also banned in child-care settings and discouraged in places of worship that were given the green light to open their doors across Ontario last week.

The provincial ministry of health says the anti-crooning commandments are rooted in science, and doctors with expertise in the matter agree.

"It's gross to think about, but every time we talk, we're spitting into the world around us," said Dr. Isaac Bogoch, an infectious disease physician and scientist with the Toronto General Hospital.

"And if we're singing, shouting or breathing heavily, we're likely expelling more saliva and nasal secretions ... and if someone's infected, then those secretions will shed more virus."

Bogoch said the rules may sound extreme, but they likely stem from a tragedy that played out in the United States in the early days of that country's COVID-19 lockdown.

According to a report posted by the Centers for Disease Control and Prevention, the novel coronavirus swept through a Washington state choir that met for rehearsals in early March. The report found two members of the Skagit Valley Chorale died of COVID-19, and as many as 87 per cent of choir members were found to have confirmed or probable cases.

"Transmission was likely facilitated by close proximity ... during practice and augmented by the act of singing," the report said.

Ontario's guidelines vary slightly by sector, with the advice for restaurants stating that "no dancing or singing may be permitted in the outdoor dining areas," which are the only ones cleared for use during Stage 2.

The guidelines for places of worship, currently allowed to operate at 30 per cent capacity provincewide, are even more specific.

The government said congregational singing or chanting should be suspended, leaving singing duties to a cantor or soloist positioned at least four metres away from worshippers. Wind instruments are also discouraged under the same guidelines.

Neil MacCarthy, spokesman for the Archdiocese of Toronto, said Catholic churches have begun observing the new rules already. He said parishioners are also being encouraged to don masks, a step he said makes people even more hesitant to burst into song.

"We've acknowledged in our communication with parishioners that some of what we are asking is uncomfortable or awkward but we're doing it out of love and concern for our neighbour," MacCarthy said. "If we want to be able to have churches open, these are the restrictions we need to employ."

"Live music and dancing may be something that we look to revisit once Ontario is further along with easing emergency health and safety measures, but for now this restriction will not hinder reopening plans," Rilett said.

Parents and child-care providers who took to social media to voice their views on the rules were in harmony on one point: such a measure risks introducing a sour note to the day-care experience for all involved.

"Not only is singing a fun way to engage children in care, it is an important tool that educators use to teach language, regulate attention and aid in emotional regulation, especially during transitions," said Toronto-based early childhood educator Paula Bordieri. "Singing is not my forte, but it is an important part of my program."