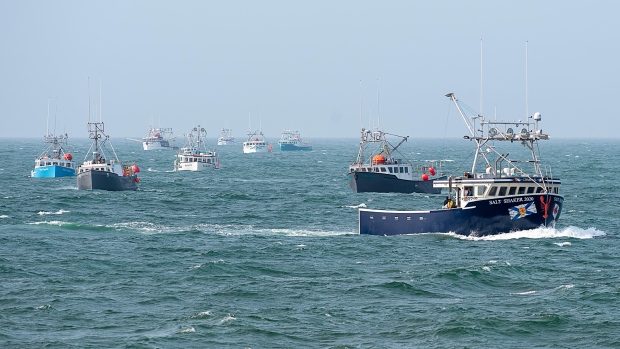 Non-indigenous boats protest the launch of a Mi'kmaq self-regulated fishery by members of the Sipekne'katik First Nation, in Saulnierville, N.S., on Thursday, Sept. 17, 2020. An official with Nova Scotia's Sipekne'katik First Nation is reporting no significant incidents as band fishermen prepare to haul lobster traps today in the western part of the province.THE CANADIAN PRESS/Andrew Vaughan

Colin Sproul, of the Fundy Inshore Fishermen's Association, said about 100 boats were removing the traps, and fishermen were intending to take them to the wharf in Meteghan, N.S., later in the day.

Sproul said the fishermen were taking action on what they believe is an illegal out-of-season fishery because the Department of Fisheries and Oceans has refused to do so.

“It's not going to take very long,” Sproul said of the operation. “All of our members have been instructed not to engage with any Indigenous people or any types of violent acts. We are just looking to remain peaceful.”

Sproul blamed the federal government for what was unfolding.

“When we are forced into this kind of position it's really indicative of how out of touch the government is with the situation down here in Atlantic Canada.”

Tension has mounted since - RCMP arrested two people on assault charges at the wharf in Weymouth, N.S., on Friday following reports of ugly confrontations over the First Nation's lobster fishing operation.

On Saturday, Indigenous fishermen set up a set up a blockade of rope and lobster traps at each end of the wharf in Saulnierville, N.S., in what they called a security measure.

Rhonda Knockwood, the First Nation's director of operations, said its fishermen and RCMP were documenting the actions of the non-native fishermen on Sunday.

“They have a lot of video and are gathering evidence of criminal activity,” Knockwood said. “We are keeping the peace here. We are just trying to implement our (fishery) plan.”

She said the RCMP was in the area but could only do so much to monitor the situation.

“The volume of boats that are on the water far exceeds the police,” said Knockwood. “The Coast Guard and DFO have a responsibility on the water too and they are absent.”

In an emailed statement the RCMP would only say it had received reports of theft and mischief to fishing gear in the Saulnierville area.

“All reports are being investigated. We will remain in the area to ensure public and police safety and keep the peace,” the Mounties' statement read.

In a news release issued earlier Sunday, Sipekne'katik Chief Mike Sack said he had held a “positive meeting” on Saturday with federal Fisheries Minister Bernadette Jordan to discuss a path forward. Sack said both had agreed to continue talks.

Sack expressed disappointment at reports that some traps lines had been cut overnight Saturday, calling it “disheartening.”

“Attempts to block our boats from fishing and our people from the wharf and ongoing damage caused to our vessels and equipment are our biggest concern right now,” Sack said. “The RCMP has extended resources over the weekend however, additional resources maybe required as the fleet continues to harvest this week.”

In an email, DFO spokesman Stephen Bornais said Sunday that “the safety and security of all harvesters is our first priority.”

Bornais said Canadian Coast Guard vessels were in the area to monitor the situation, to provide support upon request, and to ensure that sufficient search and rescue capacity is present in the area in case it is needed.

“DFO is co-ordinating with local law enforcement to ensure fishing interactions in the area remain safe and respectful,” he said.

This report by The Canadian Press was first published Sept. 20, 2020.