'Not a doomsday scenario:' Delta variant to become dominant by early summer but unlikely to cause fourth wave, modelling suggests

COVID-19 case counts are continuing to decline sharply across most of Ontario and while there is still a risk that the province could experience a fourth wave of the pandemic once the Delta variant becomes dominant early this summer the co-chair of Ontario’s science table says that such a surge is “highly unlikely.”

The projections are based on three possible scenarios for the next two months, all of which take the spread of the Delta variant into consideration.

In the best and most likely scenario, daily case counts will continue to gradually decline from their current level – a seven-day average of 617 – and dip below 300 by mid-August when Ontario would presumably be in the final step of its reopening plan.

In a slightly more pessimistic scenario, meanwhile, case counts would decline for the next 10 days but they would then slowly start to climb back up again in the wake of Ontario’s partial reopening. By late July Ontario would be seeing around 800 or 900 new cases, though the numbers would start to taper off as the calendar headed for August.

Finally, in the worst case scenario, the new more infectious variant would lead to a fourth wave of the pandemic in which daily case counts would rise exponentially and reach 2,500 by mid-August.

Science table co-chair Dr. Adalsteinn Brown did, however, stress during a press conference that such a scenario is “highly unlikely” and would only happen with a 100 per cent increase in transmission.

“This is not a doomsday scenario. We believe that if we are able to really continue a high risk community focused vaccination strategy and do that really quickly and expeditiously we have a good chance of controlling the Delta variant and actually a really good chance at a good summer,” he said. “When we say it is the dominant form of the virus that just means it makes up the largest percentage of cases, not necessarily that it is growing absolutely. In fact the reproduction number for the Delta variant has been below one for a few days now.” 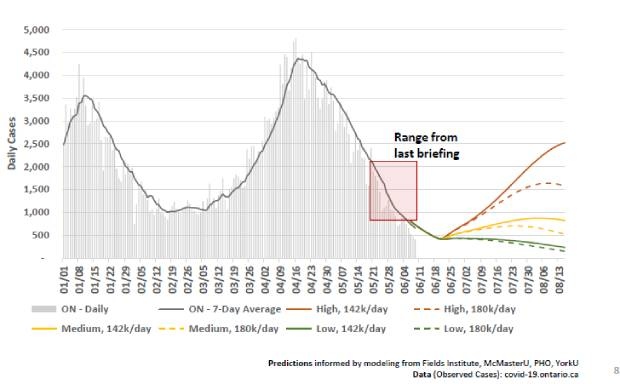 Variant may be spreading in partially vaccinated individuals

The presence of the Delta variant in Ontario has sparked concerns given that it is believed to be 50 per cent more infectious and may be more able to spread amongst partially vaccinated individuals.

But Brown said that he believes that it can be controlled by accelerating second doses in hot spot communities that are experiencing a rapid rise in Delta cases.

The modelling suggests that current high-risk community strategy being utilized by the province reduces case counts by 39 per cent compared to the strictly age-based approach used earlier in the third wave.

“I think it is critical to try to get that first dose into as many people as we can across the province and accelerate that second dose into high Delta risk communities so we can protect against the kind of surge we have seen in the United Kingdom,” Brown said.

ICU occupancy will continue to decline

The modelling released on Thursday does not differ significantly from the last set of projections that the science table released three weeks ago.

But it does provide further hope that life could soon return to something approaching normal, even in Ontario’s overburdened hospitals.

In fact, in all three scenarios that the modellers examined the number of COVID-19 patients in intensive care would decline to around 200 by early July, which is the point at which most hospitals can comfortably resume elective care and halt widespread patient transfers.

The modellers also took a closer look at the access to care deficit and found that urgent surgeries have seen a 150 per cent increase compared to last year, suggesting some hospitals may already be beginning to cut into a surgical backlog that is believed to have surpassed 250,000 procedures.

"Our hospitals are still stretched but as the numbers drop to more and more manageable levels, we'll have to start rebuilding our society and its institutions," Brown said.