'Not all sports have the same risks:' Toronto's deputy mayor asks Ford to reopen golf and tennis 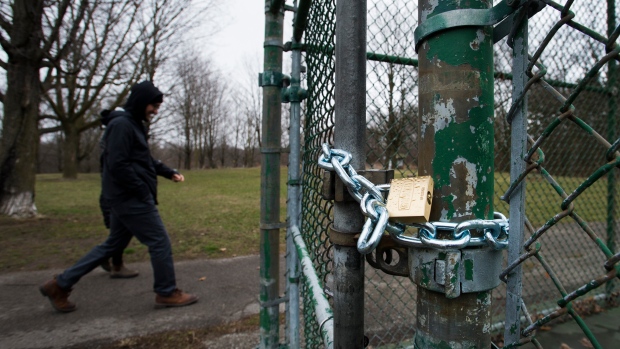 One of Toronto’s deputy mayors is asking Premier Doug Ford to reconsider his decision to order the closure of golf courses and tennis courts, arguing that “not all sports have the same risks” when it comes to the spread of COVID-19.

In an open letter sent to Ford over the weekend, Etobicoke councillor Stephen Holyday said that both golf and tennis “allow for independent play or safe spatial separation outdoors” and could be permitted “while maintaining controls in place where they are needed.”

In the letter, Holyday says that while he is generally supportive of “the recent closure of recreation spaces as a means to limit mobility,” he believes there is a way to “gradually open up certain outdoor recreation activities,” starting with golf courses and tennis courts.

“Etobicoke residents have access to ten golf courses, four of which are in Ward 2, and three more share our border. These courses serve thousands of residents, and I have heard from many recently who are looking forward to playing once again,” he said. “Providing safe opportunities to engage in sport and recreation provides critical opportunities to help with our physical and mental health. Safe recreation options help ensure citizens make the right choices, and leads us on a path to a familiar life once again.”

Ford ordered the closure of all recreation amenities back on April 16 as case counts surged and hospitalizations reached record levels.

Since then the Ontario Scientific Advisory Table has published a brief encouraging the Ford government to pursue policies that discourage people from gathering indoors while allowing them to “spend time with each other outdoors, where the risk of transmissions is extremely low.” The panel of scientific experts has also warned that “policies that discourage safe outdoor activity will not control COVID-19 and will disproportionately harm children and those who do not have access to their own greenspace.”

While Ford reversed the decision to close playgrounds, the premier has stood by the closure of other recreational amenities under the logic that it is necessary to limit mobility.

Chief Coroner Dr. Dirk Huyer, who is leading the province’s outbreak response, told reporters last week that the issue with golf and tennis isn’t necessarily the game itself but the chance that people could come into close contact with one another immediately before or after, especially if they are travelling together.

“I think it's really thinking about the broad picture where mobility again becomes one of the key fundamental factors to think about in ensuring that we reduce our mobility, reduce our movement, and therefore, limit our intersections with others,” he said.

Speaking to CP24 on Tuesday afternoon, Holyday said certain sports should be considered for reopening before the end of the province's stay-at-home order.

"I've heard from many constituents in Ward 2 and beyond who are wondering is there a chance, a possibility, to get things like golf courses and tennis courts open," he said.

"I guess the argument has been made that not all sports are the same. We are part way through a very long shutdown order and perhaps it is time to have a conversation about whether or not we can begin to open things gradually and carefully when the time is right before the end of that order."

A number of GTA mayors have previously called on the Ford government to reconsider its decision to close recreational amenities, including Mississauga’s Bonnie Crombie.

Last week, Crombie told reporters that outdoor recreation “is essential to the overall health and wellbeing” of children and adults alike and must be protected, given the comparatively low risk of contracting COVID-19 outdoors.

Mayor John Tory also expressed an openness to reconsidering restrictions around recreational amenities during a unrelated press conference on Tuesday.

Tory, however, said that decision will ultimately rest with the province.

“If it is the case that the scientists and the medical people, including our own, advise us that golf and tennis can be played safely within the context of the current health circumstances then I am very open to a reconsideration by the province,” he said. “But it is a discussion they have to have with themselves as well as us.”