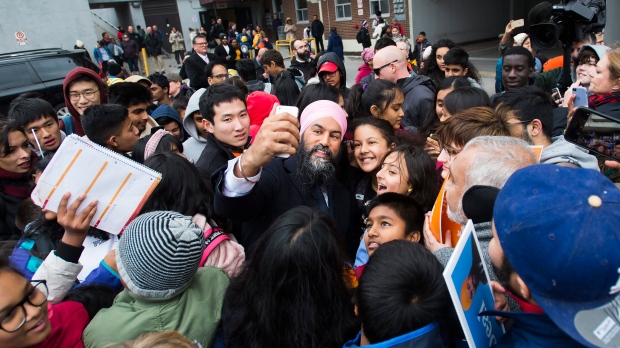 On Thursday the leader with the biggest smile was the NDP’s Jagmeet Singh. With four days to go, Singh had hugs and smiles for one and all. He was energized and excited to again lay out the NDPs big promises to Canadians.

Singh will not be prime minister on Monday night but he has doubled his popularity during the campaign and the NDP just might find some Liberal and Conservative seats outside Quebec to make up for the expected NDP losses there. The NDP needs to keep the good vibrations going to build as much support as possible. For all the Singh smiles, the NDP reality is the party today is polling below its 20 per cent showing in 2015.

In the GTA, the NDP have their eye on winning back a handful of Toronto seats lost in 2015. In the riding of Davenport, Andrew Cash stands a good chance of going back to Ottawa after a very close loss to the Liberals last time. Traditional NDP ridings like Danforth, Parkdale-High Park and maybe the Beaches-East York are also in play for the party. And then there is Brampton East. Singh will be in the riding Thursday night for a rally in a riding he lost by a whisker in the 2011 federal election. It was his base of support as an Ontario MPP. It’s another Liberal riding but the incumbent is not running and so it might be in play on Monday. Oh, and Singh stirred the coalition pot saying it is not a “dirty word.”

Liberal Leader Justin Trudeau spent Thursday in Quebec. The Liberals hope Quebec will be the one region where they can add seats. The rise of the Bloc and the NDP has made that tougher. Trudeau wasn’t smiling much. His serious demeanor reflected his message that the stakes are high and Canada faces what he says is the prospect of a Conservative win. Again and again Trudeau went on the attack, saying a Conservative government will mean Canada will face austerity and cuts to social programs.

Trudeau even had to take questions from reporters who wanted to know why his campaign doesn’t have the energy of four years ago. Trudeau dodged them and repeated he is focused on electing a Liberal government. He reminded Quebec voters that voting for the Bloc will not stop the Conservatives and Trudeau pointedly refused to answer questions about a coalition with the NDP.

The Conservatives came to the GTA and put up Andrew Scheer for as many media interviews as possible. Then, like his opponents, Scheer made sure to make a stop in Brampton. The Conservatives have to turn some of those 905 Liberal seats to have any hopes of winning. For Scheer, “coalition” is a dirty word. Scheer made one dire prediction after another of the consequences of a Liberal – NDP coalition. Scheer said “Justin Trudeau is desperately trying to salvage his job by doing a coalition deal with the NDP. But this is the coalition Canadians cannot afford.” Scheer went on to say only a Conservative majority can stop the coalition. Unlike Wednesday, today Scheer did broach the notion that his party might only manage a minority win. Scheer said whichever party gets the most seats gets the right to form the next government.

The coalition chatter is crowding out the issue that was front and centre when the campaign began. Back then all the leaders were focused on affordability, a word that has all but disappeared. The leaders still rattle off their laundry lists of promises, such as the NDP’s pharmacare plan or the Liberal commitment to climate action and the Conservative vow to eliminate the carbon tax. But then the talk turns to the most likely outcome next Monday night - a minority government and who will have the most seats, the Liberals or the Conservatives?