Notes from the campaign trail: Leaders back campaigning after English-language debate 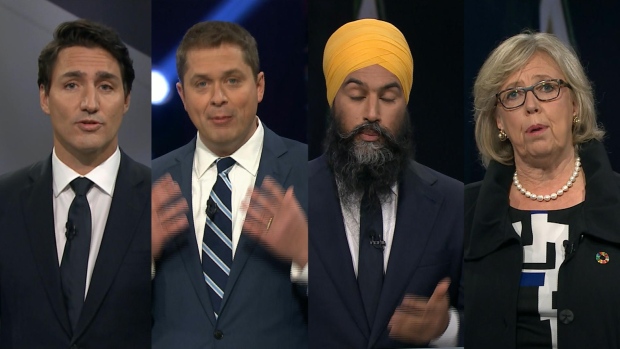 A debate recap from Oct. 7, 2019. All parties debate on the same stage for the first time and engage in important platforms that they plan to execute if elected.

It certainly was hard to find many positive reviews of last night’s leader debate format. For the politicians, these debates are more an exercise in damage control. So the six-party war rooms are probably just glad it is over and done. The consensus is that none of the leaders made a mistake that will stick.

The morning after Conservative leader Andrew Scheer was in the GTA. Scheer said he was frustrated the debate didn’t give him “more time to go back forth directly with Mr. Trudeau.” In Iqaluit, Trudeau was asked about Scheer’s attacks on him at the debate. Trudeau said Scheer “is trying to make the election about me, but the election is about Canadians.”

On Tuesday, they both seemed ready to move on from the debate and get back to their campaign strategies. The two front runners know that nothing either has tried to change the minds of voters. On Tuesday, there might have been a hint of what is to come for the two parties.

Scheer came back to vote-rich Toronto. He repeated his commitments that a Conservative government would “put shovels in the ground” to get subways built. Scheer attacked Trudeau and the Liberals for their “dithering delays” to deal with the gridlock in the GTA. For Scheer reducing gridlock is a way to help with climate change. And he also used every chance to promote his list of promises to make life more affordable for Canadians.

The Liberals took this short break between debates as a chance to get Trudeau up to the far north. The Liberal polling must be showing that there are votes to be had zeroing in on the climate change issue. In Iqaluit, Trudeau called climate change “a real emergency.” He said it was important that so much of the English TV debate was devoted to climate issues. And Trudeau repeated his debate line that Scheer would “rip up the only serious climate change plan this country has ever had.” Trudeau used the word affordable, too, but he linked it to climate change.

For the NDP’s Jagmeet Singh, the campaign is all about convincing voters that the policies of both the Liberals and Conservatives are only going to take care of wealthy Canadians. In a CP24 interview, Tuesday, Singh said, “I don’t work for the rich. I work for the people.” He called himself a “fighter,” saying Canadians need NDP MPs in Ottawa to fight for pharmacare and other social programs.

So where does that leave the campaign with 13 days, one French debate and one holiday weekend to go? The race for first place could not be closer. Four recent polls all show a statistical tie between the Liberals and the Conservatives nationally. Any impact of the debate and the post-debate coverage on the polls won’t be known until Thursday or Friday. It is leaving politicos shaking their heads, wondering what if anything will break the deadlock between now and October 21.