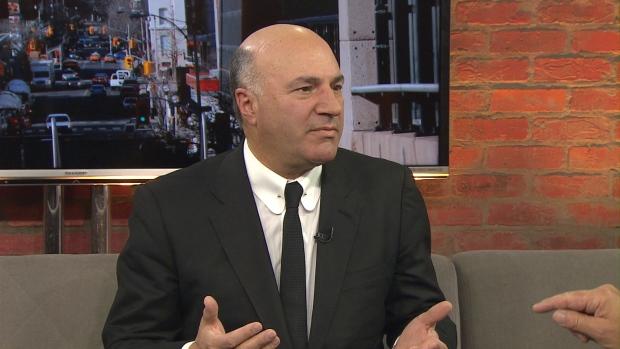 Businessman and television personality Kevin O'Leary won’t announce that he is seeking the leadership of the federal Conservative party on Monday despite reports to the contrary, a spokesperson confirms.

According to Nancy Cheung, O’Leary plans to use a meeting with members of the Conservative caucus in Ottawa as an “exploratory event” only and has no intentions of using the event to kickoff a potential leadership campaign.

“He isn't announcing. Kevin has other business in Ottawa as well so he thought he'd take the opportunity to meet members of the conservative caucus,” Cheung told CP24 on Saturday.

On Friday, the Toronto Sun reported that O’Leary intends to inform members of the Conservative caucus of his intent to seek the leadership of the party during the lunch-hour meeting; however the paper added that a formal announcement may not be made until later this month.

The ‘Shark Tank’ host has long been rumoured as a potential candidate for the Conservative leadership. Last month he told CTV News that he continues to consider the job but may wait until the last-minute to formally enter the race.

“I would like to jump into this thing at the last minute possible and I have that luxury. That could be as late as February 23 because everybody knows who I am. I don’t have to waste a lot of time getting name recognition. Most people already know what my policies are,” he said.

They are currently 14 candidates registered to run for leadership of the federal Tories.

O'Leary is an on-air contributor with Bell Media. CP24 is a subsidiary of Bell Media.