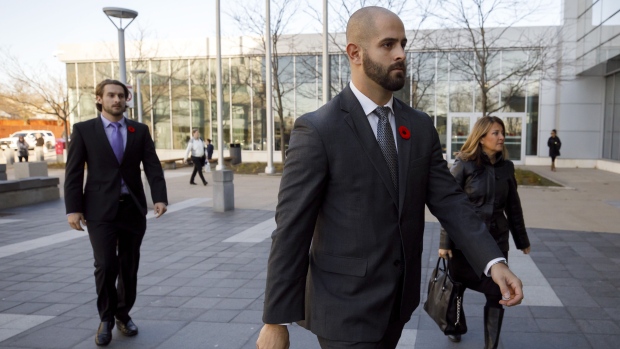 TORONTO - Lawyers for an off-duty Toronto police officer found guilty in a brutal assault on a young man challenged his conviction Wednesday, arguing the verdict was unreasonable in light of the evidence and issues with the victim's credibility.

Theriault and his brother, Christian, were charged with aggravated assault and obstruction of justice months after the encounter, which took place near their parents' home in Whitby, Ont., east of Toronto.

Theriault was convicted last year of the lesser offence of assault and acquitted on the obstruction charge, while his brother was cleared on all counts.

His lawyers allege the judge who oversaw the trial made several errors and are asking the appeal court to enter an acquittal or order a new trial.

Ontario Superior Court Justice Joseph Di Luca did not give sufficient weight to the fact that Miller perjured himself when he denied breaking into cars, including the Theriault family truck, that night, they argue.

In their submissions Wednesday, the lawyers took issue with Di Luca's statement that Miller's denial of his criminal activity should be assessed in a “fair context and with a sensitivity to the realities that racialized individuals face in society,” saying that amounts to speculation regarding Miller's motives since the young man, who is Black, never acknowledged lying or explained why he did so.

While Di Luca did acknowledge issues with Miller's credibility and the need for corroboration, the judge “diluted” the importance of the perjury by factoring in the social context, the lawyers argued.

“Accepting that there will be times when social context is important in understanding why someone might not be forthcoming about events, this case had nothing to do with that type of context,” lawyer Michael Lacy argued.

Di Luca then mistakenly found corroboration of Miller's account by misapprehending the evidence on parts of the encounter, Lacy argued.

The judge erred in finding that a gouge in the window of a home was caused when a retreating Miller was struck in the face with a pipe, Lacy said, noting no expert evidence was brought on the issue and no witness testified to that effect.

Di Luca also erred in concluding that Theriault pushed Miller with the pipe after the young man was brought to the ground, an account provided by one witness but not by others, nor by Miller himself, the lawyer argued.

Theriault's legal team also argued their client should not have been found guilty of assault when he was charged with aggravated assault, alleging the two are separate charges and it would be “unfair” to convict their client of the lesser offence.

Should the court uphold the conviction, they are also seeking to challenge Theriault's nine-month jail sentence, arguing it is outside the normal range and fails to take into account certain mitigating factors.

“The trial judge aggravated the sentence for the appellant because he was a police officer and because he was white and the complainant was Black,” she said.

“In the context of this specific case, these facts are happenstance and are not proven to be a motivation behind these offences.”

Theriault was also sentenced to 12 months of probation following incarceration, along with a five-year weapons prohibition.

Prosecutors alleged during trial that Theriault and his brother beat Miller with a metal pipe, leaving him with a ruptured eye and other injuries.

The defence, meanwhile, said the brothers wanted to arrest Miller after catching him and his friends stealing from the family truck. The lawyers said their clients acted in self-defence because they feared for their lives after Miller confronted them with a pipe.

In a verdict delivered last June, Di Luca said he couldn't rule out the possibility that self-defence played a role in the early portion of the incident -- the part during which Miller sustained the eye injury that prompted the aggravated assault charge.

But the judge said the self-defence argument failed when it came to the later portions of the incident, when the officer grabbed a pipe and hit Miller in the head as the young man fled.

As a result, Theriault was cleared of aggravated assault but convicted of the lesser charge of assault.

The defence appeal was heard by videoconference Wednesday, while an appeal filed by the Crown is set to be heard Thursday.

Prosecutors are challenging Theriault's acquittal on the more serious charge of aggravated assault and a charge of obstruct justice.

They are also appealing the acquittal of Christian Theriault on both those charges.