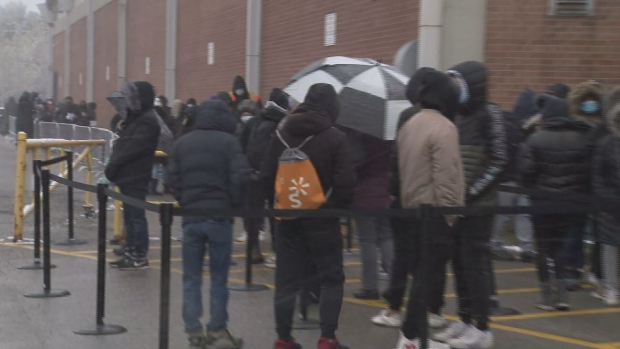 People lineup outside in the snow for a COVID-19 vaccine at a pop-up clinic outside Downsview Arena.

Mayor John Tory says the city is continuing to work out the "logistics" of vaccine pop-up clinics as the sites continue to attract long lineups and demand that often exceeds available supply.

Residents and employees aged 18 and older in select hot spot postal codes have been eligible to get a shot through mobile teams and hospital-run pop-up clinics in their communities, but in many cases, the vaccine is available on a first-come, first-served basis.

At a pop-up clinic at Downsview Arena, located near Jane Street and Wilson Avenue, people waited in long lineups in the snow in hopes of getting a shot early this morning.

Earlier this week, people camped out overnight outside a pop-up clinic at Parkway Forest Community Centre near Don Mills Road and Sheppard Avenue.

One resident told CP24 he lined up for hours two days in a row only to be told there were not shots left.

A spokesperson for North York General Hospital, which hosted the clinic at the Parkway Forest Community Centre, previously told CP24 that the decision to require residents to line up was done so to make vaccines “as accessible as possible to high-risk buildings and people who face barriers going to mass vaccination clinics.”

“Not everyone can travel to an immunization clinic and some people don’t have a computer and have difficulty booking appointments online,” the spokesperson said. “Mobile clinics, brought into people’s neighbourhoods that allow people to walk in to book an appointment, are the most accessible to the highest need populations. This includes some seniors, non-English speaking groups and those without computers.”

Tory noted that while the provincial system allows for booking appointments at city-run clinics, creating a centralized booking system for pop-up clinics is more of a challenge.

"We are working as a team, you know the city and the hospitals, the provincial government. Everybody is kind of working on this. But part of the problem is that it may not be possible to adjust the booking system to book appointments as quickly as you can pop up these clinics," Tory said.

"What you get is lineups from people. And in a way, it's a good thing, the lineup, because it indicates a keen interest. As time goes on, we are going to find ways to have these as well organized as say the city clinics have been because they are on the provincial registration system. You have an appointment, you don't have to wait."

Tory said the city is focused on trying to get the vaccine out to as many people as possible.

"At the moment I think it is more important that we get the vaccines in the arms," he added.

"It is not as if we are having people come from all over the city to stand in those lineups. These are local people in the places where the virus has hit the hardest and that's a good thing. So we are continuing to work on I'll call it the logistics of that but in the meantime our objective is just to have as many of these opportunities.”

Tory said there are 29 pop-up clinics that are operating across the City of Toronto today.

Currently, only those 60 and older, or 50 and older in Toronto's hot spot postal codes, are eligible to book an appointment through the provincial system. All Ontarians who are 40 and older can now book a shot at participating pharmacies.

But Dr. Isaac Bogoch, an infectious diseases specialist and member of the province's vaccine task force, said they will likely soon drop the age of eligibility for booking an appointment on the provincial system as more doses of the vaccine start to arrive in the coming weeks.

"In fact, in May, we are expecting to get way more Pfizer than we already initially thought we were going to get and I think we are going to start really just clipping through the age groups and also the priority populations and priority neighbourhoods at a much faster pace.”

On Wednesday afternoon, Tory announced that the city plans to triple the number of vaccines allocated to mobile teams and pop-up clinics in 13 hot spot postal codes.