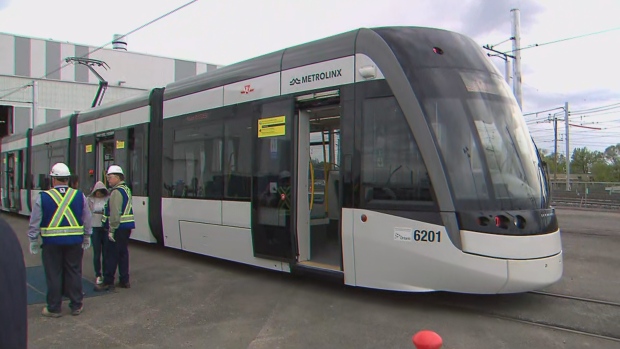 One of the vehicles slated for use on the Eglinton Crosstown is shown during a media demonstration on Wednesday.

Today marked a milestone in the construction of the Eglinton Crosstown as officials gave members of the media a sneak peek at one of the light rail vehicles slated for use on the line.

The 19-kilometre project isn’t scheduled to open until 2021 but on Wednesday afternoon a demonstration was held at a new vehicle storage facility near Black Creek Drive and Eglinton Avenue to show off the capabilities of the Bombardier vehicles that will one day serve the route.

The vehicles are similar to the TTC’s new low-floor streetcars with the exact same specs and seating layout. They will travel at the same speed as streetcars when travelling in a dedicated lane above ground from Laird Avenue to Kennedy Station but will be capable of hitting 80 km/h on the 10 kilometre portion of the route that run underground between Laird Avenue and Mount Dennis Station.

Metrolinx says that about 200 commuters could fit comfortably in each vehicle.

“To have the first vehicle run on its own power and be able to be driven around the yard more than two-and-a-half years before the completion of the project is a really good outcome for us,” Metrolinx CEO Phil Verster told reporters prior to the demonstration. “It leaves us with enough time to test and modify the vehicles so that it can fit into the news system. It is a great outcome as we continue to focus on delivering this project on time.”

Bombardier initially signed a $770 million contract for 182 vehicles in 2010 but that agreement was amended in 2017 to reduce the order to 76 vehicles at a cost of $392 million.

Verster told CP24 on Wednesday that Metrolinx was well behind in its commitment to the transit agency as recently as 18 months ago but has now delivered six vehicles, allowing it to keep up with the delivery schedule.

Three of those vehicles were delivered about two weeks late and Bombardier was docked an undisclosed amount for damages, as per its contract with Metrolinx.

“I am comfortable that Bombardier knows exactly what they need to do deliver and we are pushing them really hard and using all our levers,” Verster said. “Keep in mind that 18 months ago this program itself was two years behind and the first deliveries were two weeks late.”

Construction on the $5.3 billion Eglinton Crosstown began in 2011 and is expected to wrap up in September, 2021.

The driver cockpit in one of the vehicles slated for use on the Eglinton Crosstown is shown.

The inside of one of the new vehicles slated for use on the Eglinton Crosstown is shown during a media demonstration on Wednesday.