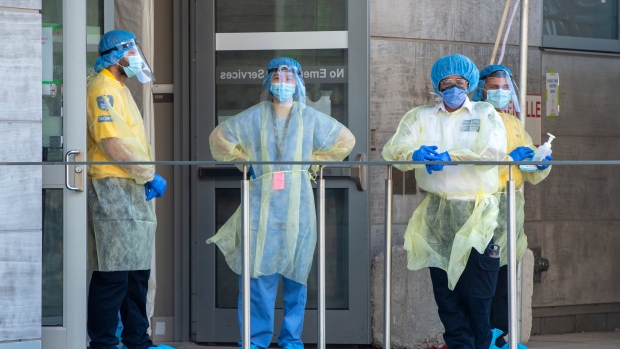 A group representing more than 43,000 doctors in Ontario is slamming the provincial government’s new colour-coded COVID-19 framework saying the measures don’t go far enough in preventing the spread of the disease.

"Doctors are worried,” Dr. Samantha Hill, president of the Ontario Medical Association (OMA), said in a news release issued on Thursday. “It is clear the new tiered framework is not enough to control the virus, which is spreading among more and more people.”

The framework, which was released last week, places each of Ontario’s 34 public health units into one of five categories based on a series of trends, including the number of people that are testing positive or being hospitalized.

The five categories are colour coded, with green being the lowest set of measures, followed by yellow, orange, red and grey, which signifies a total lockdown.

At issue are the thresholds at which regions can move from tier to tier, which the OMA argues should be much lower and in some cases 50 per cent lower.

For example, a region would need to report a weekly incident rate of 100 cases per 100,000 residents in order to move to the “red zone” or control level.

Moreover, the OMA is strongly recommending that areas in the “red” and “yellow” zones should close bars and indoor dining altogether, which is not currently restricted at those levels in the provincial framework.

While applauding the work of local medical officers in Toronto and Peel Region, both of which are in the red zone and have since adopted enhanced measures on top of the provincial baseline, the OMA said that non-essential services in those areas, as well as Ottawa, should be restricted.

"Ontario's doctors want to work with Premier Ford to make our province as safe as possible for as many people as possible," OMA CEO Allan O'Dette said. "We can't have a healthy economy without healthy people. Following the recommendations of Ontario's doctors will stop the spread and support a safe reopening."

The request comes in the wake of a report in the Toronto Star which suggested that the indicators ultimately adopted by the province were much higher than those proposed by members of its own health table.

Despite that, Ontario’s Health Minister Christine Elliott said the government considered a “wide variety” of factors before putting the plan into action.

“There were several numbers that were suggested to us but then there was also a consideration made of the issues on the other side with respect to mental health, the significant anxiety and depression levels that we were seeing that we also had to think about in making some of these recommendations,” Elliott said speaking to CTV News Toronto on Thursday.

“That is what was reflected in the final framework that was brought forward to me for consideration and that I then referred to cabinet without any revisions.”

Elliott argued that the framework presented by the Ontario government prevents the possibility of “prolonged, deeper periods of lockdown,” but stopped short of saying whether or not the proposed benchmarks would be changed in the face of record-breaking numbers.

“We are learning. So if we need to make changes we will but at the moment we are relying on the framework for decisions going forward.”