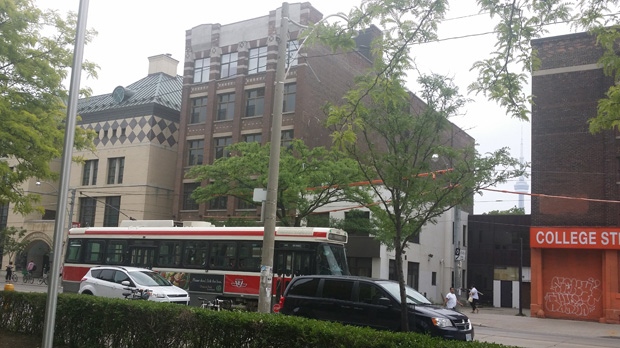 The Ontario Municipal Board has given a developer the green light to build a University of Toronto residence at College Street, between Spadina Avenue and Huron Street. (Codi Wilson/ CP24.com)

The Ontario Municipal Board’s decision to give a private developer the go ahead to build a 25-storey student residence on College Street has ruffled a few feathers in the neighbourhood.

City council previously rejected Knightstone Capital Management’s proposal to build the large University of Toronto residence on a parcel of land on College Street, between Spadina Avenue and Huron Street, but that decision was overturned by the OMB in a ruling released June 19.

“I think it is frustrating that the OMB can override city council on that,” Nishi Kumar, a recent graduate of the urban studies program at U of T, told CP24.com Tuesday.

“Council exists for a reason and then there is this body that can kind of override whatever decision city council makes and it is a body that isn’t democratically elected by people who live in the city.”

Although the height of the building has been reduced from the initially proposed 42 storeys, Kumar said she fears the building will change the appearance of the downtown neighbourhood for the worse.

“It is still going to kind of ruin the historic look of this block, which I really like about it,” she said.

Area resident Garry Lebman told CP24.com he too worries that the location for the residence may not be suitable.

“In any city, having a view is at a premium and…the problem with big, big residences is they cast shadows and therefore they block off the sunlight for other people,” he said.

“I think very often, nobody thinks about … whether it is going to make the neighbourhood more gloomy.”

In a 2012 statement defending its support for the project, the University of Toronto identified a “pressing shortfall” of residence space at all three of its campuses.

The post-secondary institution cited rising international and out-of-province enrolment as one factor in the shortage.

“International students bring significant academic benefits to the university, and tangible economic benefits to the Toronto region, Ontario, and Canada… We are delighted as a national institution to be attracting more out-of-province students,” the statement read.

“Above all, we are simply short of residence spaces for students from Ontario – including the Toronto region – who very reasonably would like to live near the St. George campus.”

In the statement, the university boasted its long-standing reputation in the city and criticized some of its neighbours, claiming that they have been “hostile” to the presence of post-secondary students in their area.

“There will be many mid-and high-rise residences around our St. George campus in the years ahead,” the university said.

“Notwithstanding the rhetoric of some, the only issue here is whether one site on College Street should move forward sooner rather than later for vertical development to accommodate a few hundred fine young people seeking higher education in downtown Toronto.”

But Yolen Bollo-Kamara, president of the University of Toronto Students' Union, said their main concern is not the location of the proposed residence but the fact that a private company is heading up the project.

“We do know there is a severe lack of residence space,” Bollo-Kamara said.

“The main concern is that it is a for-profit company.”

She said students are concerned that the company won’t provide the same supports as the university does with its own residences.

“Their goal is to make money,” Bollo-Kamara said. “I think that it should be the university that should prioritize building its own residences.”

The university has previously defended the private partnership saying it believed developing at least some of its residences in partnership with the private sector was justified due to provincial funding challenges.