‘On de road again,’ Caribbean Carnival grand parade returns to Toronto. Here is what you need to know

The sights and sounds of the Caribbean took over Exhibition Place Saturday as the Caribbean Carnival’s grand parade made its triumphant return to Toronto streets.

“We're just excited to be able to get back ‘on de road,’” Chair of the Toronto Caribbean Carnival Board, Laverne Garcia, told CP24.com.

After a two-year pandemic hiatus, the 55th anniversary of the parade promises to be one of the biggest ones yet with more than 10,000 masqueraders expected to participate.

For those who have never been to the parade, CP24.com has the answers you need about when and where the parade is, what it represents and what it means to “play mas.”

WHAT IS THE ORIGIN OF THE PARADE?

The Caribbean Carnival dates back to the late 18th century in Trinidad and Tobago as a celebration that marked the end of slavery and freedom for African-descended plantation workers.

People took to the streets to celebrate their new freedom, mimicking what they saw in pre-Lenten masquerade balls and parties thrown by their former masters.

“So while they would have these balls, it eventually led to the uprising and the freedom and emancipation. But they would gather in the streets and have their own sort of parallel celebrations but in the streets,” Garcia said.

Fast forward to 1967 and that’s when Toronto hosted its first grand parade, which would go on to become one of North America’s largest outdoor festivals.

The parade is held annually during the August long weekend, which is also recognized as Canada’s Emancipation Day weekend.

The parade was gifted to Canada by the Caribbean community during the country’s centennial celebrations.

“After two-and-a-half years of lockdown and people having been mandated to separate and not be in community, it's amazing to see people coming out again and just be so excited to participate in carnival,” Garcia said.

“It's interesting to me how Toronto as a whole has really embraced carnival. And for a lot of people, it's just part of what summer means for them in Toronto,” she added.

WHO PARTICIPATES IN THE PARADE?

In order to march in the parade, which extends along Lake Shore Boulevard West, revellers must join a participating masquerade “mas” band.

“These bands apply to us, they get approved, and then they get seed funding from us. And then they go ahead and they start their mas camp, which is where they usually get a commercial property for the summer…and they build their costumes there,” Garcia said. 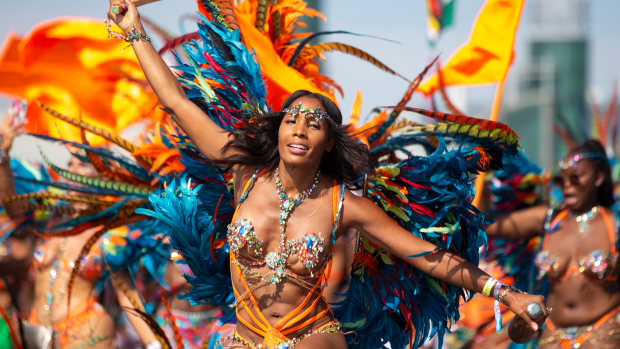 Bands typically start preparing for carnival a year in advance.

“I want to say they're like little families because people spend countless hours there, building costumes, getting ready for all the revellers that are going to be coming,” Garcia said.

Every band has a number of sections, and each section has its own theme that ties in with the band’s overall theme.

Band members represent their theme through their costumes and floats.

When it comes time to participate in the parade, it’s also known as “playing mas.”

“When you're playing mas, the average reveler, they're going down the street they're playing, they're jumping, they're dancing to the music, and they're just enjoying themselves,” Garcia said.

WHAT DO THE COSTUMES REPRESENT?

Many spectators go to the parade to see the beautiful array of costumes and floats.

When the parade first began in Trinidad and Tobago, masqueraders wore costumes that represented a political statement.

“As carnival evolved, and as time went by it sort of became more about freedom of the person and not being held back by the constraints of society… I think that's part of the reason why there's a lot of costumes that are sort of really open and there's a huge push to embrace yourself, your body and freedom and liberation,” she added.

Each band puts hours and hours of work into designing and making costumes for the grand parade.

Tribal Carnival is the third biggest band in Toronto and has over 100 masqueraders.

CEO Celena Seusahai says the band’s theme this year is Kingdom and all of the band’s sections will have costumes that reflect that.

“My section this year is called Emerald City…you’ll see green and blue,” she told CP24.com. 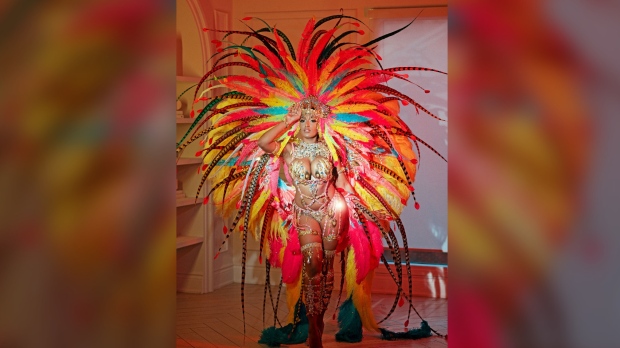 Seusahai says the band only uses Toronto-based designers and that they start production on their costumes in May.

“It does take a lot of work and we put in a lot of research, hours to make sure that the theme that we're portraying comes off correctly. I would say the design process, we start in December. As soon as one carnival ends we start planning for the next.”

WHAT CAN ATTENDEES EXPECT AT THE PARADE?

If it’s your first time attending the parade, prepare to “jump up” and dance the day away.

Bands will make their way across the Exhibition Grounds with masquerades dancing to soca, dancehall and more, while waving flags that represent their native lands or heritage.

Onlookers are also encouraged to dance and bring their own flags to the parade.

“Whatever it is, just represent where you're from. And that's part of it too, because a lot of this also has to do with positivity,” Garcia said.

“Fifty-five years ago, we didn't have the same attitude towards multiculturalism and celebrating where we're from and our culture.” 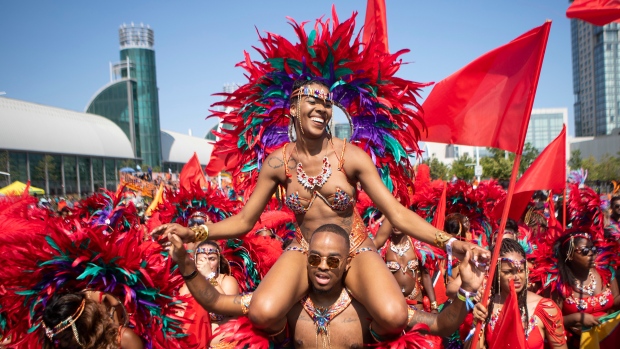 There’s also a competition component of the parade. Bands will be competing for the title of band of the year.

“So you've got your costume, you're playing mas, you’re dancing down the street, and then you get to go across the stage and show off all your hard work. And the judges will judge based on creativity, impact and different things, different categories. And then one band will be crowned the band of the year,” Garcia said.

The winner will be able to choose when they walk across the stage at next year’s grand parade.

WHEN AND WHERE IS THE PARADE?

Opening ceremonies began at 9:30 a.m. at the Exhibition Place grounds and Hotel X, and the parade and got underway at 10 a.m., ending around 6 p.m.

This year, the parade has a different route compared to previous years.

There will be two starting points- some bands will walk the parade route first, while others will cross the main stage to be judged first.

Masquerades will walk along Lake Shore Boulevard West through the Exhibition Place grounds. 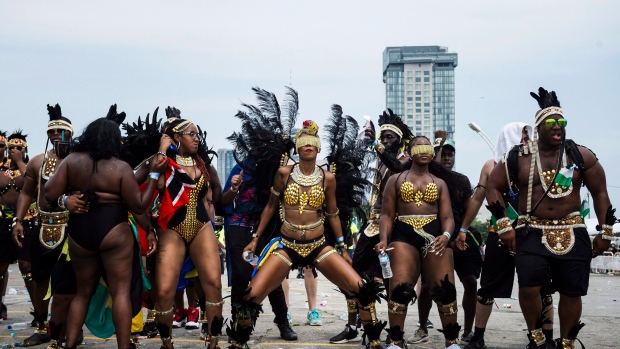 Attendees can watch the parade from Lake Shore Boulevard or you pay an entrance fee to the Exhibition Grounds to watch it from there.

There will be many vendors along the Lake Shore selling food and drinks throughout the day..

“A must is comfortable shoes and lots of water. And, I guess a freedom of spirit and a willingness to have a lot of fun.”

Participants perform during the Grand Parade at the Caribbean Carnival in Toronto on Saturday, July 30, 2022. The parade returned to the city after a two-year hiatus as a result of the COVID-19 pandemic. THE CANADIAN PRESS/ Tijana Martin