One American, 2 Austrian climbers presumed dead after avalanche in Banff 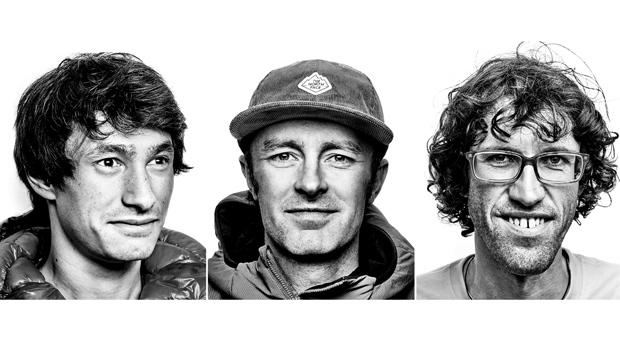 Outdoor apparel company The North Face confirmed Thursday that American Jess Roskelley and Austrians David Lama and Hansjorg Auer disappeared while attempting to climb the east face of Howse Peak on the Icefields Parkway. They were reported overdue on Wednesday. David Lama, left to right, Jess Roskelley and Hansjorg Auer are seen in a composite image of three undated handout images. The North Face said the three professional climbers are members of its Global Athlete Team. THE CANADIAN PRESS/HO-The North Face,

Outdoor apparel company The North Face confirmed Thursday that American Jess Roskelley and Austrians David Lama and Hansjorg Auer disappeared while attempting to climb the east face of Howse Peak on the Icefields Parkway. They were reported overdue on Wednesday.

The North Face said the three professional climbers are members of its Global Athlete Team.

"They are missing, and local search and rescue has assumed the worst," The North Face said in a statement.

"We are doing everything we can to support their families, friends and the climbing community during this difficult time."

Parks Canada said recovery efforts are on hold because of a continued risk of avalanches in the area. Rain and strong winds in the forecast are expected to make conditions worse.

The east face of Howse Peak is remote and Parks Canada says its mixed rock and ice routes make it an exceptionally difficult climb.

Barry Blanchard, a mountain guide in nearby Canmore, said he talked to Roskelley when the three climbers arrived in the area about a week ago. He gave them some suggestions on routes, including some in the Howse Peak area.

Blanchard called it a breathtaking mountainscape with a steep alpine wall, including many hazards, that's popular only with expert climbers.

"There's definitely avalanche-prone slopes and cornices and snow mushrooms that are a form of avalanche that can be deadly," he said.

He said the three men are considered among the top one per cent of alpinists in the world.

"If you want to equate it to racing, they are Formula 1 drivers," Blanchard said.

Ash Routen, an outdoor adventure writer based in England, said their deaths would be a heavy loss for the sport.

"It's always a shock when any climber dies, particularly those that are very well publicized, but perhaps people might be a little more shocked that it wasn't an 8,000-metre peak with a high death rate in the Himalayas," said Routen, who has been closely following the careers of Lama and Auer.

"Inherently all mountains carry risk. ... You can just be in the wrong place at the wrong time."

Routen said the 28-year-old Lama, who is the son of a Nepali mountain guide and a nurse from Austria, was only five when Everest mountaineer Peter Habeler discovered his talents and took him under his wing.

Lama became the youngest person to win an International Federation of Sport Climbing World Cup in both lead climbing and bouldering. He shifted his focus to free climbing in 2011.

A standout climb by Lama, Routen said, was on the Compressor Route in Patagonia's Cerro Torre. He became the first to scale the mountain without the assistance of bolts.

"That made people sit up and talk, for sure," Routen said.

Auer, 35, who grew up near the Dolomites in Austria, guided sheep from the family farm into the mountains every summer as a boy, said his North Face profile.

Routen called him a brave and a technically skilled alpinist who often climbed difficult routes on his own.

"He is a relatively reserved guy who wasn't somebody looking to play his achievements out to the media," Routen said.

"Sure, he was sponsored by North Face and a few other companies, but very much he wanted to do his own thing ... and climbed purely for the enjoyment of being in the mountains."

An online biography of Roskelley on The North Face website says he grew up in Washington and spent his childhood adventuring with his family throughout the Pacific Northwest.

In 2003, at age 20, he summitted Mount Everest with his father, John Roskelley, who is considered one of the best American mountaineers of his era.

The American Alpine Journal said there is at least one route named after the younger Roskelley in Alaska called the Erdmann-Roskelley Northeast Face.

In Banff, a daily avalanche bulletin by Parks Canada's mountain safety team shows the danger level as variable, ranging from low to high.

Parks Canada notes that a significant storm blew into the area late Wednesday. The storm is expected to drop 30 centimetres of new snow and rain, along with extreme winds.

-- By Daniela Germano in Edmonton, with files from Colette Derworiz