One dead in latest Toronto shooting 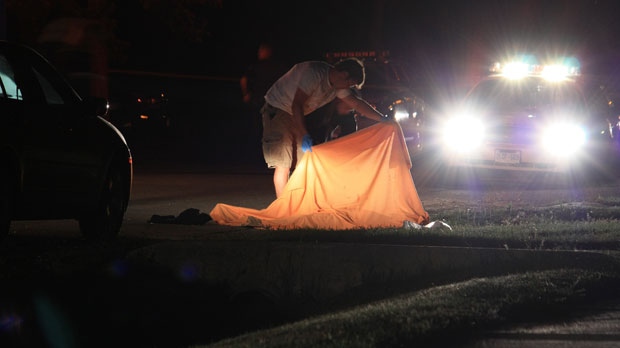 A man has been shot dead in the middle of a residential street in Etobicoke early Thursday morning.

He is the only fatal victim in a spate of shooting incidents that happened in the last 24 hours.

The unidentified man, who is believed to be in his 20s, was shot several times in the head and upper torso at around 4 a.m. on Meadowbank Road, near Burnhamthorpe Road and Highway 427.

No suspects are in police custody but homicide investigators remain on the scene in hopes of finding evidence that will help them solve the city's latest murder.

Meanwhile, police are also investigating a shooting scene in the city’s east end near Jones and Boultbee avenues. Neighbours called 911 at around 2 a.m. after hearing about four gunshots.

No injuries have been reported to police but investigators say a bullet hit a home on Blake Street.

Several shell casings were found in the area.

One man was shot in the leg at around 6:45 p.m. on Cane Grassway, near Jane Street and Finch Avenue.

No suspects have been apprehended in the case though a man wearing dark clothing was seen running from the scene into Firgrove Park.

The Ontario Provincial Police were also called to Highway 401 at Allen Road for a report of a violent incident involving either a gun or a knife Wednesday night at around 9:15 p.m.

Police said someone ran from the scene. Officers brought in police dogs to try and track down a suspect.

Gun violence has certainly marked this summer in Toronto.

On June 3, the city has taken aback by a mass shooting inside the Eaton Centre food court. Two people died and six others were injured.

Then, about two weeks later, a man was shot dead while sitting on a sunny, crowded patio on College Street in the middle of the afternoon.

On Canada Day weekend, a toddler was hit by a stray bullet while sitting in her mom's parked car and in a separate incident, police rushed to the Beaches neighbourhood after reports a man was shot at a fireworks gathering.

Both the toddler and the shooting victim suffered non-life-threatening-injuries.

Although the number of homicides in the city have decreased steadily in the last few years, statistics show that shooting incidents are up by about 30 per cent.

Toronto police say so far this year, there have been 16 gun-related deaths, up 7.1 per cent from this time last year.

The number of shooting victims has jumped to 163 from 119 last year.

Still, police insist the city is safe and officials with the Toronto Police Service say they will ramp up their presence in neighbourhoods that have seen a spike in gun violence.