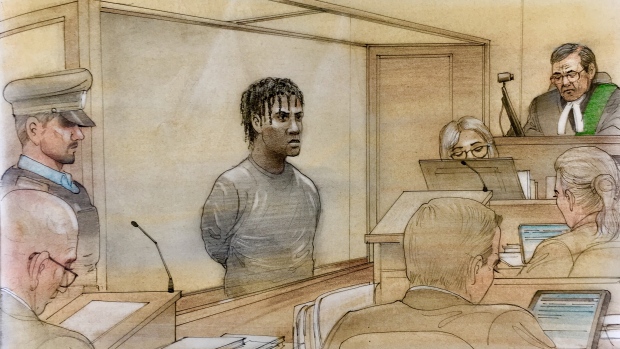 Andrae Douse, 21, is shown in this courtroom sketch on May 16. Douse was one of three suspects wanted in connection with the May 1 murder of Blain Grindley.

One of three suspects in the murder of a Rexdale man has turned himself into police; one day after a Canada-wide warrant was issued for his arrest.

Blain Grindley, 26, was found suffering from multiple gunshot wounds inside a townhouse complex near John Garland and Humber College boulevards on the afternoon of May 1.

Few details are known about the shooting, however at a news conference on Wednesday police released the names of three suspects who they said that they were able to identify through surveillance camera footage and information from witnesses.

One of those suspects, 21-year-old Andrae Douse, turned himself into police sometime following that news conference and appeared in court on Thursday morning to face a charge of first-degree murder.

Douse is scheduled to return to court on June 26.