One person dead after double stabbing at Canada’s Wonderland

Police are investigating after one person was killed and another sent to hospital following a stabbing in the Canada’s Wonderland parking lot in Vaughan early Sunday.

“It’s a very large dynamic scene here at Canada’s Wonderland,” Const. Andy Pattenden told CP24 Sunday morning. “There were a large number of people here for an event. The incident itself took place outside of the security gate in the parking lot.”

York Regional Police were called to the parking lot of the popular amusement park in the Jane Street and Major MacKenzie Drive West area around 12:30 a.m. for a weapon call, Pattenden said.

When police arrived, they found two males suffering with stab wounds. A 21-year-old man was pronounced dead at the scene. The other victim was rushed to hospital with life-threatening injuries.

It’s not clear what motivated the stabbing.

According to the park’s website, Wonderland was open until midnight Saturday for a special “Halloween Haunt” event aimed at those above 13 years of age.

The park confirmed Sunday that it will be open today, as well as tonight for the same event.

Pattenden said police are now appealing to any other victims that may have left the scene or any witnesses that have not yet spoken to investigators to come forward. 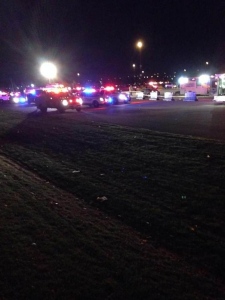 Police vehicles are pictured in the parking lot of Canada's Wonderland in Vaughan where a fatal stabbing took place Sunday October 26, 2014. (@FitnessFitThis /Twitter)