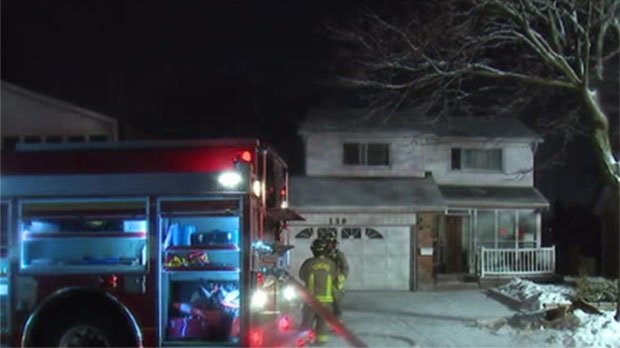 Firefighters are shown at the scene of a two-alarm blaze in Scarborough on Friday evening.

A man was revived on scene and rushed to hospital in life-threatening condition after being pulled from a house fire in Scarborough without vital signs Friday evening.

The blaze broke out at the residence on Alexmuir Boulevard in the Brimley Road and Finch Avenue area shortly after 6 p.m.

District Chief Glenn Partington tells CP24 that by the time crews arrived on scene there was “heavy flames” coming out of a side door and significant smoke.

He said that crews immediately gained entrance into the home and went down into the basement, where they found the victim in the vicinity of a kitchen.

The victim was then taken outside where he was administered CPR and transferred into the care of paramedics.

Partington said that the victim’s two sons, a 16-year-old and a six-year-old, were also in the home at the time the fire broke out.

He said that reports are that the older son had tried to pull his father out but “got overcome by the smoke and had to leave.”

Both youths were eventually taken to hospital with minor injuries.

The cause of the fire is not immediately clear.

“Right now it is under investigation,” Partington said. “We are waiting for the Office of the Ontario Fire Marshal and the Toronto Fire Services investigators to arrive on scene.”