Donations are flooding in to help cover the cost of a funeral for three-year-old Elijah Marsh, who died tragically after wandering away from a North York apartment building and out into the cold early Thursday morning.

Justin Kozuch, the organizer of the campaign, told CP24 Friday that 100 per cent of the money raised will go to Elijah's family.

"I realize that the money will never be able to replace what they have lost but I hope that this will certainly help them cover the cost of a funeral and maybe they have other uses for the funds," Kozuch said.

Elijah was found without vital signs at around 10 a.m. Thursday morning about 300 metres from his grandmother’s Neptune Drive apartment building, near Wilson Avenue and Bathurst Street.

A surveillance camera captured him walking away from the building at around 4 a.m. wearing only a T-shirt, diaper and winter boots. Elijah, however, wasn’t reported missing until 7:30 a.m. when his family woke up and could not locate him.

When the little boy disappeared, the temperature outside was -17 C but felt closer to -28 with the wind chill.

Before the toddler was discovered, a massive search was launched, bringing out more than 100 Toronto police officers, volunteer search teams and a helicopter on loan from York Regional Police.

“When we heard the unfortunate news of his passing, it was gut-wrenching," said Kozuch, who is a father of two young children.

"As parents, we go to the ends of the earth to protect our children and when things like this happen, I cannot imagine what the family is going through right now. They must be absolutely devastated."

Kozuch said he has not yet spoken to the family about the fundraiser.

"I do have contact information for someone who is very close to the family and I will be reaching out to them either later today or tomorrow to talk about what the next steps are and how to get them the funds that we’ve raised once the campaign ends," he said.

"At the rate that it is going right now, I’m relatively confident that we will get pretty close or surpass a $100,000."

Tilt.com also waived all credit card fees in support of the cause.

Lenore Butcher, a close friend of Elijah's family, said a trust fund has been set up. Money can be donated directly to the family through Scotiabank using transit number 01601, institution number 002 and account number 016020285323. Butcher says that money raised through the online campaign will be transferred into that account.

A memorial with flowers, teddy bears and cards continues to grow outside the apartment building where Elijah wandered away from. An outpouring of support has also flooded social media, with throngs of people posting condolences using the hash tag #RIPElijah.

At a memorial for three-year-old Elijah Marsh, a photo frame holding a picture of toddler reads, "May you find warmth in the arms of the angels." (Cam Woolley/ CP24) 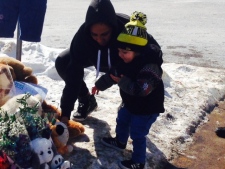 A little boy drops off an item at the memorial for three-year-old Elijah Marsh, who died after wandering out into the cold early Thursday morning. (Cam Woolley/ CP24)

At a memorial for three-year-old Elijah Marsh, a photo frame holding a picture of toddler reads, "May you find warmth in the arms of the angels." (Cam Woolley/ CP24) 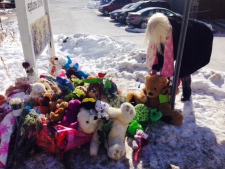 A woman drops off a teddy bear at the growing Neptune Drive memorial for three-year-old Elijah Marsh. (Cam Woolley/ CP24)