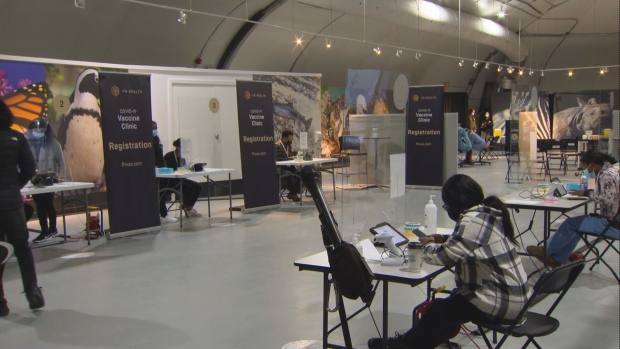 Staff are pictured at a vaccine clinic run by FH Health at the Toronto Zoo Jan. 12, 2021.

Ontario’s official opposition is calling for the auditor general to look into a sole-source contract for providing vaccine clinics in the Greater Toronto Area following a report outlining donations to the ruling PC Party by company board members.

The company, FH Health, announced a contract to run 10 clinics around the Greater Toronto and Hamilton Area earlier this month.

Altogether, FH board members donated $13,200 to the Ontario Progressive Conservative Party in September, just a couple of months before the contract was announced.

The company told Queen’s Park Today that it never asked or suggested that any individuals make donations. Records also show that FH board members made donations to the Ontario Liberal Party over the years.

CP24 has reached out to FH Health for comment, but did not immediately receive a response.

FH Health announced on Jan. 9 that it would be offering COVID-19 vaccine shots in partnership with the government at 10 clinics in Brampton, Hamilton, Mississauga, Oakville, Pickering, Richmond Hill and Toronto, including one at the Toronto Zoo.

The decision to award a private company a contract for vaccination clinics in the GTHA was criticized by some doctors when it was announced, with some saying they could handle more appointments if they were given the resources.

In an email to CP24 Wednesday, a spokesperson for Solicitor General Sylvia Jones said the government decided to go with FH because they had already been successful in a previous process that was competitive, that bid for providing mobile testing capacity.

“As FH Health already had an existing relationship with Ontario Health to deliver COVID-19 testing capacity, the Ministry of the Solicitor General entered into an emergency procurement with FH Health to establish additional vaccine clinics – to urgently accelerate boosters for education workers before the return of in-person learning – as they already had physical capacity and Health Human Resources supports in place,” the statement read.

However the move does not appear to have accelerated the vaccine program. Daily vaccinations in Ontario peaked before Christmas and have in fact declined over the past few weeks.

While only around 47.5 per cent of Ontario’s eligible population have received booster shots, daily vaccination numbers have been dwindling and the government has said that demand for vaccine doses has declined.

The private clinics run by FH also appear to have fared worse than those run by the government. Some of the FH clinics have reported that they have been running mostly empty at times, seeing only about one-third of the appointments that they can handle.

In Toronto, public health officials have said that city-run clinics continue to run at capacity.

In a letter sent Wednesday to Ontario Auditor General Bonnie Lysik, NDP MPP Taras Natyshak said he is “deeply concerned” and wants her office to probe the contract. He noted that her 2021 annual report found that many sole-source contracts “lacked strong processes” to ensure proper use of funds and suffered from “vague reporting practices.”

“Given these previously noted serious concerns with sole-sourced contracts by the Government, I am asking your office to investigate the selection of this deal with FH Health and how, exactly, Ontarians are on the hook for the contract of another PC-friendly supplier with no discernible history of vaccination provision during this complex and difficult moment of the pandemic,” Natyshak wrote.

- With files from Beatrice Vaisman and Chris Herhalt