Ontario behind its neighbours on COVID-19 4th dose eligibility. But that may change 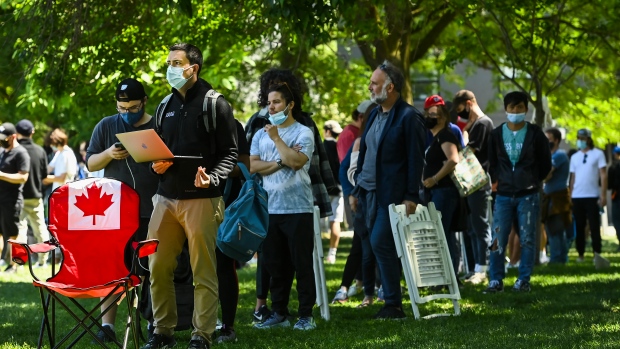 A man works on his laptop as thousands of people wait over six hours for their COVID-19 vaccine at a pop-up mass vaccination clinic at Jimmie Simpson Recreation Centre during the COVID-19 pandemic in Toronto on Thursday, June 17, 2021. THE CANADIAN PRESS/Nathan Denette

Ontario is not yet allowing most adults under the age of 60 to get a fourth COVID-19 vaccine shot, putting it at odds with the United States and Quebec and prompting one doctor to prepare legal action to get the province to widen eligibility.

In the face of a demonstrated weakening of the mRNA vaccine’s ability to prevent infection three or four months post injection, along with the increased transmissibility of the now dominant BA.5 Omicron variant, ordinary Ontario residents not currently eligible for a fourth dose, especially healthcare workers, are asking for the chance to get another shot.

“But then I got a call from Ottawa Public Health on Friday, saying the Ministry of Health told them not to widen fourth dose eligibility, unless they are Indigenous, immunocompromised or living in a congregate setting, so I had to cancel,” Kaplan-Myrth told CP24.

She said many of her patients are travelling to Quebec, where anyone 18 and up can get a fourth shot so long as three months have elapsed since their last one.

In a letter sent to the Ford Government this week, she implored the province to lower the age eligibility below 60.

“People are going to get COVID-19 two or three times, many of our patients working in the community and who have children and that vaccine we gave them in Dec. or Jan. 1, we could give them another vaccine to get them through to October,” she said.

October is about when Canada’s Chief Medical Officer and the National Advisory Council on Immunization are telling provinces to launch booster dose campaigns, ahead of an expected wave of COVID-19 transmission.

“I understand and respect the voices on both sides here, but I truly believe we are in a period of scientific uncertainty.”

He said officials are likely in a waiting game, analyzing the trends – some of which suggest a recent rise in COVID-19 transmission in Ontario – to determine when would be best to make fourth doses available to all adults.

“You want protection to align when cases are most prevalent. Ideally you would not be getting an additional vaccine for three to six months, and we have the next generation of vaccines coming for fall – it’s basically already July,” he said.

If Ontario does not widen eligibility, Kaplan-Myrth says she and her lawyer, Mark Bourrie, will file a complaint with the Ontario Human Rights Tribunal this week.

“It’s crazy to let this stuff go to waste – the people of Ontario have already paid for this stuff,” Bourrie told CP24. “It would be a shame to tie people up and waste the taxpayer’s money with litigation when there’s such a sensible alternative.”

Since Dec. 2020, Ontario has received 2.4 million more COVID-19 doses than it has administered.

It is not clear how many of those doses remain viable, but most provinces told the federal government to stop sending them vaccine back in 2021, as they had more doses than they could use.

CP24 has repeatedly asked Ontario’s Ministry of Health how many of those 2.4 million doses were wasted during administration or have expired in freezers over the past six months.

Each time, the ministry has refused to answer.

“It doesn’t seem like any reporters can get their eyes on how many vials of vaccine are sitting there with an expiry date of July,” Kaplan-Myrth said.

When asked, The Ministry of Health declined to say if there is a plan imminent to widen COVID-19 vaccine eligibility for fourth doses, but Premier Doug Ford told reporters on Thursday morning that “you’ll hear further about our (fourth dose) rollout in the next little while.”

On Saturday, a spokesperson for Ford's office suggested the province is preparing for a fall booster campaign.

"We are reviewing the NACI’s most recent guidance and will be providing details for fall booster shots over the coming weeks."

For Dr. Doris Grinspun the CEO of the Registered Nurses’ Association of Ontario, there’s little time to wait.

“Nurses are asking us, they want a fourth booster and they don’t want it to be based on age,” she said. “We should open it up before we get more into this situation with more people becoming infected.”

So far, Ontario nurses have been driving to Michigan, New York or Quebec for a fourth dose.

Kaplan-Myrth says she has more than 80 patients and other supporters behind her effort to widen eligibility.

Some are immunocompromised, others work in health care, more are in essential, in-person workplaces where they seen hundreds of people per day.

If the data was better and clearer, Razak says every jurisdiction in the world with a stockpile would be rushing to administer fourth doses to everyone.

“Let’s say there was a conclusive New England Journal of Medicine paper on benefits of a fourth dose – we’d all be going and doing it right away.”

In the meantime, Razak said the public should make sure they have all of the COVID-19 vaccine doses they are eligible for today, mask in indoor spaces and have gatherings outdoors.

“All of those things, they give you protection regardless of vaccine status.”