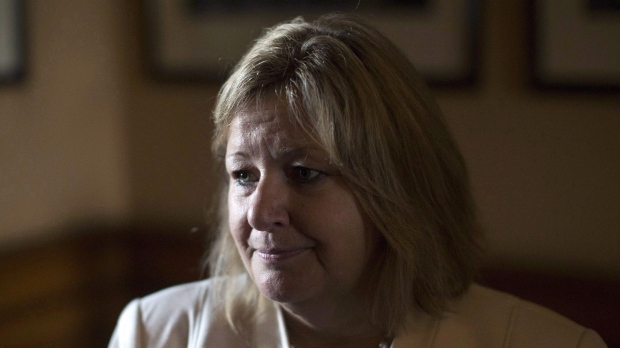 Ontario Education Minister Lisa Thompson speaks with a journalist following Question Period at the Ontario Legislature in Toronto on Wednesday August 1, 2018. Ontario has ended a $50 million fund that helped child care centres cover increasing labour costs without passing them on to parents. THE CANADIAN PRESS/Chris Young

TORONTO -- Ontario has ended a $50 million fund that helped child care centres cover increasing labour costs without passing them on to parents.

The move has already led to at least one child care centre in Peel Region, west of Toronto, telling parents that their fees will increase -- up to an extra $72 a month for full-time infant care.

"It's supposed to help control child-care fees for Ontario families, so if it's being cut by $50 million, that's going to have a direct impact on costs for families," she said. "The impact is going to be that parent fees are going to go up and Ontario families already pay the highest child care fees in the country."

Ontario's so-called fee stabilization support was introduced last year under the then-Liberal government as the minimum wage increased from $11.60 an hour to $14 an hour. It was essentially a way to subsidize the pay raises in facilities where staff had earned less than $14 an hour, so the costs weren't put on parents in the form of higher fees.

That funding ended as of March 31, the Progressive Conservative government told child-care operators in mid-April. Any money that flowed to them after that date "will be recovered," a memo said.

When asked about the funding cancellation, Education Minister Lisa Thompson touted the recently announced child-care tax credit that applies on a sliding scale to families with incomes of up to $150,000, that will provide a rebate of up to $6,000 per child under seven, and up to $3,750 per child between seven and 16.

"When we take a look and drill down a little bit deeper, the supports for the parents that they need will still be in place," she said.

But Ferns said it wasn't billed that way when it was introduced, and child care centres are still obligated to pay workers at least $14 an hour.

"Those costs are real, those costs are still there," she said. "The minimum wage did go up to $14 and I think centres need to have funding to help keep child care fees low."

Mitzie Hunter, the former Liberal minister of education, said the minimum wage is still $14 -- the Progressive Conservative government cancelled a planned increase to $15 -- and so are those costs to child care centres.

"Daycares will have no choice but to pass on the fees, but also it's more pressure on the system," she said. "It sends the system into needless stress and uncertainty."

NDP Leader Andrea Horwath said that $50 million will have to be made up somehow.

"Usually that means increases in child-care fees, which are unaffordable already," she said.

Thompson recently announced that the province is continuing with a wage enhancement grant of up to $2 an hour for early childhood educators.