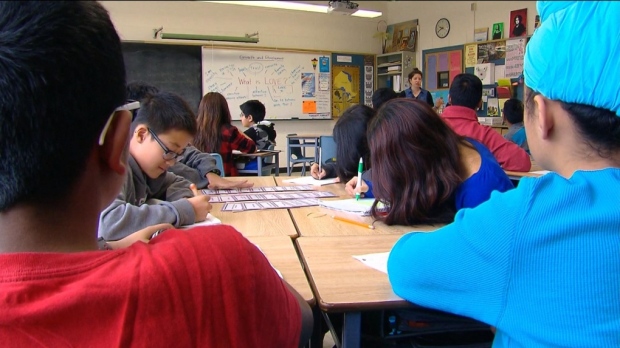 TORONTO - Teachers in Ontario's English Catholic system have voted 97 per cent in favour of a strike, making them the third of four major teachers' unions to take steps toward potential job action.

“Catholic teachers will not accept any agreement that would be detrimental to learning and working conditions in our schools,” Stuart said in a statement.

“The government will try to portray this as teachers escalating tensions, but the reality is they have created this situation by continuing to pursue their reckless cuts to education.”

Negotiations between the province and the education unions started on tense terms a few months ago amid government moves to increase class sizes, which will take an estimated 10,000 teaching positions out of the system over four years.

Recent legislation that caps wage increases for public service workers at one per cent for three years has further angered teachers, who are threatening legal action, saying it infringes upon their collective bargaining rights.

Education Minister Stephen Lecce said in a statement Wednesday following OECTA's strike vote that he wants a deal, not a strike.

“While our government has been a reasonable force and student-focused at the bargaining table - focused on keeping kids in class - OECTA is escalating at a time parents want us to focus on getting a deal that provides predictability for families,” he wrote.

The Catholic teachers are not yet in a legal strike position, and negotiations will continue.

Talks between French teachers and the government are ongoing.

The Canadian Union of Public Employees reached a deal on behalf of its 55,000 education worker members last month, narrowly avoiding a strike. It includes a one-per-cent wage increase each year over the life of the three-year deal. The agreement also restores $58.3 million in government funding used largely for educational assistants working with students with special needs.