Ontario community's work to prevent turtles, snakes being killed on roads a model for others 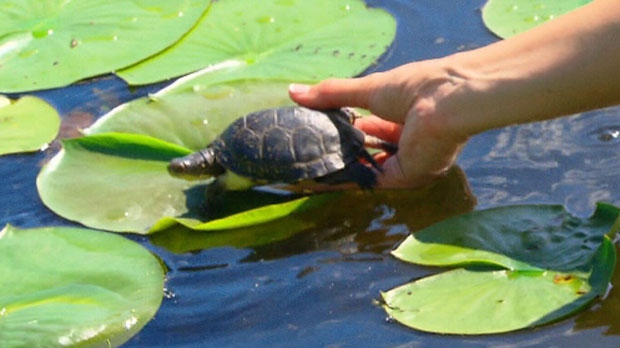 A rural Ontario community's work to prevent endangered reptiles from being killed on a 3.6-kilometre stretch of road -- once considered among the world's deadliest for turtles -- is being held up as a successful example of how to protect vulnerable wildlife.

A new research paper, published Friday in the Wildlife Society Bulletin, details the community of Long Point's construction of roadway fencing and culverts -- tunnels used for animal travel -- to decrease the numbers of turtles and snakes dying on the Long Point Causeway in a southwestern part of the province.

The road connecting the Long Point Peninsula on Lake Erie and mainland Ontario was ranked as the world's fourth deadliest site for turtle road mortality in 2003. Researchers also estimated that since 1979, as many as 10,000 animals per year were killed by traffic on the two-lane stretch.

The study found, however, that the community's work to protect the reptiles living in wetlands surrounding the causeway has reduced the number of turtles venturing onto the road by 89 per cent over 10 years, while the number of snakes going on to the road dropped by 28 per cent.

Researchers say the efforts around Long Point could be a useful model for other communities located near fragile ecosystems around the world.

Study lead researcher Chantel Markle of McMaster University said it's important to tackle the issue of road mortality head-on, especially for turtles that are particularly susceptible to the issue.

"Turtles have delayed sexual maturity, so some species can't reproduce until up to 20 years old," Markle said in an interview. "This makes the adult turtles really important to the population ... When you have road mortality, even a few adults killed every year can have major negative impact on the population."

The effort to protect the reptiles of Long Point -- dubbed the Long Point Causeway Improvement Project -- began in 2006 when community members gathered to discuss the issue.

Rick Levick, project manager and a cottager in the area, said people felt it was important to conserve the species that live in the Big Creek National Wildlife Area, a UNESCO-designated biosphere reserve that borders the causeway.

Some of those species, including the Blanding's, Spotted and Snapping varieties of turtle, are either considered at significant risk or listed as endangered species.

Levick said community members began raising funds to put in the infrastructure necessary to keep animals off the roads.

The community began putting up fences in 2008, and two years later Levick said the number of turtles dying on the roadway had already been cut in half. The reduction in snake deaths, while noticeable, was less pronounced because of their greater flexibility, he said.

Researchers attribute some of the project's success to the fact that three different types of fencing materials were used depending on the type of roadway terrain, adding that communities wishing to emulate the results must be flexible in their approach.

The next phase of the project involved building culverts through which animals could travel between their wildlife area and Long Point Bay. Researchers said many species need to be able to migrate safely between the two areas in order to thrive and had been using the road to do so in the past.

The study on the community's efforts tracked road mortality rates for five years both before and after fencing and culverts were installed and documented the sharp declines in the number of road deaths among the area's reptiles.

Levick said the findings suggests the importance of a two-pronged strategy for protecting wildlife.

"You've got to think about culverts and fencing as a single system," he said. "It's not one thing or the other, you've got to do both."

Public outreach also became part of the strategy, Levick said, adding it was important to educate the public on the risks they posed to threatened species as well as on ways to help.

One of the simplest but most effective strategies, he said, was simply to change the turtle crossing signs in the area.

Rather than leaving a small, unobtrusive placard up year-round and desensitizing the drivers to its presence, Levick said the community purchased bolder signs that only go up during the spring and summer months.

Both Levick and Markle agree that enlisting community support and participation is a critical piece in a successful animal protection strategy.