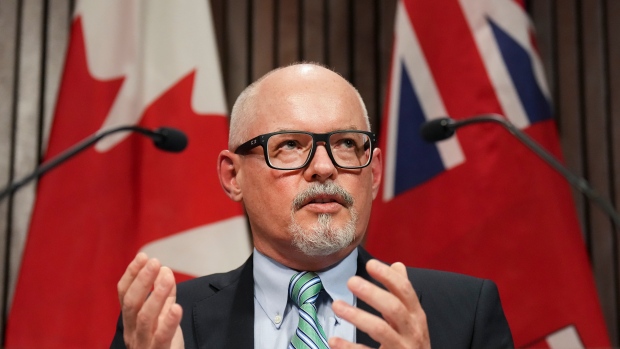 Dr. Kieran Moore, Ontario's Chief Medical Officer of Health speaks at a press conference during the COVID-19 pandemic, at Queen’s Park in Toronto on Monday, April 11, 2022. THE CANADIAN PRESS/Nathan Denette

Ontario's top doctor says the province's current monkeypox vaccination strategy is working and cases of the virus appear to be levelling off, but some who work with people in shelters say the immunization program should be expanded to better serve those communities.

Chief Medical Officer of Health Dr. Kieran Moore said the province has vaccinated more than 20,000 people against monkeypox so far, with the priority group being gay, bisexual and other men who have sex with men that meet certain criteria.

"We have been able to get the vaccines that we need from our federal partners, we've been able to staff our immunization clinics to meet the needs of our population, we have the funding necessary and the partnerships to ensure that our health system protects those at risk from this virus," Moore said in a recent interview.

"Our response in Ontario has been quite robust. We've got a long ways to go still, but it appears that our total number of (monkeypox) cases is plateauing."

But for some, the province's vaccination strategy doesn't do enough to protect those living in high-risk settings like homeless shelters, noting a recent confirmed monkeypox case in a person who attended a Toronto shelter.

Diana Chan McNally, a community worker at a Toronto centre for people in need, said she believes monkeypox vaccines should be broadly available to those living in shelters given the congregate nature of the settings and the fact those who live there might share belongings.

"This kind of laissez-faire attitude towards the vaccine is part and parcel of the fact that we don't seem to prioritize creating special protocols or really taking into account the unique conditions that can lead to monkeypox infection in the shelter system," said Chan McNally.

She also said the current monkeypox vaccine strategy doesn't account for intersections between people who live in shelters and those who might be eligible for the shot, such as sex workers and people in the LGBTQ community experiencing homelessness, who may not have access to city-run immunization clinics.

"Why we can't bring, even in small amounts, dedicated amounts of the vaccine to the priority groups within the shelter system, I don't know," she said. "I think that's something that could potentially help mitigate any potential for spread."

Chan McNally also said she wants to see the shot offered to shelter workers. "If we protect their health, we can protect other people in the shelter system," she said.

Toronto Public Health held pop-up monkeypox vaccine clinics at the shelter where a case was recently reported, which Moore says is part of Ontario's "ring immunization" strategy targeting those who may have been exposed to a known case.

Patricia Mueller, CEO of Homes First, the company that oversees the shelter where the case was confirmed, said there have been no further cases of monkeypox linked to that one. She said their staff, the city and Toronto Public Health acted quickly to move the infected individual to an isolation and recovery site and set up a vaccination clinic.

Rita Shahin, associate medical officer of health at Toronto Public Health, said the city is not currently planning a larger monkeypox vaccine program for all shelter residents, though those who meet the criteria are eligible for the shot.

"We need to watch where the disease is, who's most at risk, and if we see additional cases or spread in the shelter system, that's certainly something we would look at," Shahin said.

Shahin also said the city's monkeypox vaccine supply is "fairly limited," though Moore said the province has a "significant reserve" of doses ready for emergency situations.

Thomas Tenkate, a professor at the School of Occupational and Public Health at Toronto Metropolitan University, said he agrees men who have sex with men should remain the primary group targeted for monkeypox vaccination based on transmission trends, but added that pop-up clinics in shelters could be a way to proactively curb spread of the virus.

"If you're going to vaccinate people who are in shelters, the strategies have to be different than the general community," Tenkate said. "People who use shelters or are homeless, you really have to go to them."

He said another challenge to vaccinating those in shelter settings is understanding their health history to flag any possible complications from getting the shot. "That might be a limiting factor to implementing it as well," he said.

Public Health Ontario reported a total of 449 confirmed cases of monkeypox in the province as of Thursday, up from 423 on Tuesday. The agency's latest report said the majority of cases — more than 77 per cent — were reported in Toronto.

It also said almost all the people infected are male, with only two reported in female patients. The virus generally doesn't spread easily and is transmitted through prolonged close contact via respiratory droplets, direct contact with skin lesions or bodily fluids, or through contaminated clothes or bedding.

— With files from Allison Jones.

This report by The Canadian Press was first published Aug. 8, 2022.