Ontario has confirmed 550 new cases of COVID-19, which is the biggest single-day increase so far.

The dramatic rise in cases comes after the number of new cases confirmed each day by the Ministry of Health had appeared to level off after a then record 462 were reported on April 3.

On Monday the province reported 309 new cases, which was the lowest number in a week. It then confirmed 379 new cases on Tuesday, prompting Premier Doug Ford to warn reporters that the curve would have to go down for two or three weeks for him to feel as though things were headed in the right direction.

“If we see a little decline by no means should we be sitting back and think the curve is going away,” he said.

The increase in cases today was also accompanied by a rise in deaths with the province confirming another 21 fatalities in people who had contracted the virus, pushing the total to 174. The number of deaths, however, is likely higher than that as the province's data is only accurate as of 4 p.m. one day prior. A count of data provided by the province’s 34 public health units revealed that there were 204 deaths attributed to the virus as of 3 p.m.

While the number of people hospitalized with the virus actually declined slightly in these latest numbers (from 614 to 605) there are 13 more people in intensive care units (246) than there were yesterday and eight more people on ventilators (195).

The backlog of tests waiting to be processed, meanwhile, appears to be on the rise again after the province had virtually eliminated in it in recent days.

At one point that number neared 11,000 but officials were able to get it as low as 329 before it began steadily rising again this week. It now stands at 1,102.

The number of tests being done on a daily basis also remains a concern.

On Tuesday, Health Minister Christine Elliott told reporters that the province has the capacity to turn around 13,000 tests a day but in reality it is doing nowhere near that number.

In fact over the last 24-hour period, the province only tested 3,237 people. That was an increase from the 2,568 people tested over the previous 24-hour period but it translates into a rate of testing that still lags behind many other provinces.

Quebec, for example, has already tested more than 100,000 people despite having half of Ontario’s population.

Speaking at Queen’s Park on Wednesday afternoon, Premier Doug Ford said that his “patience has run thin” and that he finds the level of testing in the province “absolutely unacceptable.”

He said that he wants to see “every single” long-term care facility patient in the province tested along with every healthcare worker and every first responder.

He said that he has confidence in Ontario's public health officials "to get the job done" but said there should be "no more excuses" now that the province has ramped up its testing capability and has dozens of operational assessment centres.

“The days are done with 2,000 and 3,000 a day being tested,” he said. “Moving forward we need to see 13,000 tests every single day. We have to make this happen and we need to start doing it immediately starting tomorrow.”

Yaffe said they were working on measures to expand testing criteria as quickly as possible.

“I think the bottom line is we want to do more testing – we are working very hard now to increase the testing and expand the criteria and encourage clinicians to test people where they are concerned the person has symptoms that may be indicative of Covid-19.”

Williams defended the province’s testing regime from the Premier’s criticism, saying Ontario has tested more people than any other province, which is not true. 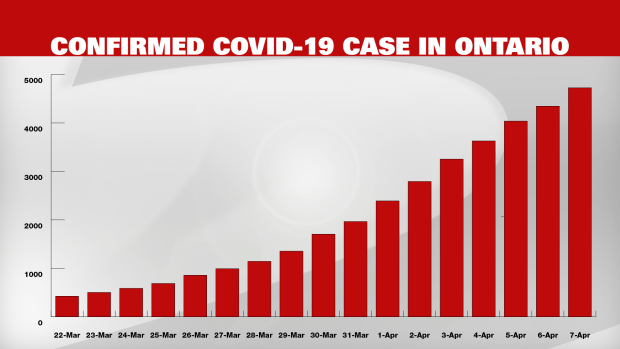 First death in someone under the age of 40

The data released by the province on Wednesday includes seven new deaths in residents at long-term care homes, pushing the total number of fatalities in residents at those facilities to 76.

The data also suggests that one of the new deaths attributed to the virus occurred in someone between the ages of 20 and 39, marking the youngest person to die from the virus in the province to date.

There are now 5,276 confirmed cases of the virus province wide, including recoveries and deaths.

That number is up 120 per cent from this time last week when the province had 2,392 confirmed cases.

More than 2,000 Ontarians have made full recoveries from the virus, representing about 39 per cent of Ontario’s infections since the outbreak began in late January.

Here are some of the other highlights from the data: