Ontario has confirmed another 401 new cases of COVID-19, bringing the totally province wide to 2,793.

It is down slightly from the record 426 new cases confirmed on Wednesday but still represents the second biggest one-day increase since the province began tracking the numbers.

The province is also attributing a total of 53 deaths to the virus, up from 37 one day previous.

However, as of 10 a.m. on Thursday, data gathered by CTV News Toronto and CP24 shows the total number of deaths reported by all of the province’s 34 local public health units actually totals 75.

As well, two additional deaths linked to an outbreak at a long-term care home in Bobcaygeon, Ont. were confirmed by the facility to CTV News on Thursday morning. The total number of deaths at the facility is now 16 and the wife of a resident has also died.

“We know that this is an underrepresentation of the numbers and we do continue to work very hard to ensure our systems are as up to date as possible so that we can provide as current information as possible,” Dr. Barbara Yaffe, Ontario's associate chief medical officer of health, conceded during a news conference on Thursday afternoon. 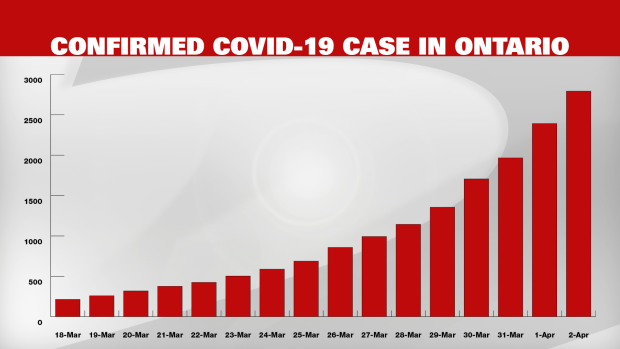 16.8 per cent increase in cases

The data provided by the province on Thursday morning is based on the information it had received from public health units as of 4 p.m. on Wednesday, so it is not entirely up to date.

The new cases represent a 16.8 per cent jump in the total number of cases provincewide.

There also appears to be a rising number of cases involving hospitalization, according to the latest data. There are currently 405 patients hospitalized with COVID-19 in Ontario, including 167 in intensive care units. Of those people, 112 of them are on ventilators.

“We have to wait to see what happens (with the data). Now with the number of travellers dropping, we are seeing already the number of cases reported involving people with a history of travel is dropping down. That is to be expected. But the question now is with the public health measures we have taken, what is the data going to look like next week?” Ontario’s Chief Medical Officer of Health Dr. David Williams said during Thursday’s news conference.

Province has cut into testing backlog

While the number of cases of COVID-19 is continuing to rise at an alarming rate, the province has been successful at cutting into the backlog of tests waiting to be processed, something that Health Minister Christine Elliott said on Wednesday will be necessary to get a clear picture of the extent of virus spread locally.

"We want to know how much that has been impacting our daily numbers and now with the backlog pretty well gone we should get a truer sense tomorrow and into the weekend of what is happening day by day," Williams said.

The total number of people to be tested for COVID-19 in Ontario now stands at 62,733, which still lags behind other provinces on a per capita basis.

Greater Toronto Area public health units account for 53.6 per cent of all confirmed cases, a percentage which has been tracking downwards in recent days as the virus has spread to more locations in the province.

[Editor's Note: The tally of deaths recorded by local health units has been modified to reflect revised data from Toronto Public Health. On April 1, Toronto officials said that there had been 19 deaths related to COVID-19 in the city so far. On April 2, Toronto’s medical officer of health said there were in fact 11 confirmed COVID-19 deaths to date and that some of the previous deaths had been inappropriately attributed to COVID-19.]