Ontario could see more than 1,000 new COVD-19 cases daily by first half of October

The Ontario government is projecting that the province could see more than 1,000 new COVID-19 cases per day by the first half of October as the province enters its second wave of the coronavirus pandemic.

He was joined by Dean of the Dalla Lana School of Public Health at the University of Toronto Adalsteinn (Steini) Brown and Matthew Anderson, President and CEO of Ontario Health.

The health officials noted that cases across the province have been steadily rising throughout the month of September and that Ontario is on an upwards trajectory similar to what other jurisdictions have experienced, like Michigan, U.S. and Victoria, Australia.

They also said cases are currently doubling approximately every 10 to 12 days.

The projection comes as Ontario reported 625 new cases on Wednesday and four new deaths. On Tuesday, the province recorded 554 new cases of the virus and a record 700 new cases on Monday- the highest daily count recorded since the beginning of the pandemic in March.

The experts did not release an updated projection on the number of deaths the virus could cause across the province but said the projection trends noted during the first wave could be observed in the second wave.

In the beginning of April, modelling data said there could be 3,000 to 15,000 deaths with public health measures in place and 100,000 deaths without those measures.

“If we were to model those death rates and present those here today you would see very similar potential high death rates in the province,” he added.

To date, a total of 2,848 Ontarians have died from the virus.

The experts warned that the projection does not account for the recent introduction of tightened public health measures, including lowered limits on private gatherings to 10 people indoors and 25 outdoors, and restrictions on alcohol sales.

Williams said that the government is not necessarily looking to revert back to Stage 2 but will consider imposing stricter restrictions in certain areas.

"...We’re seeing now very much concentration in certain dense urban areas and we may have to do even more further stringent action that would move them closer back down to a Stage 2,” Williams said.

He added that the key message is to continue health and safety measures, including physical distancing, hand washing and wearing a mask, to reduce the spread of the virus going forward.

“We saw in the first wave it did work and it brought it down. This is what Ontarians did and did well and did it consistently. That is what gives me great confidence to say let’s do it again,” Williams said.

Cases rising among all age groups

As cases continue to rise across the province, the experts said infections are rising in all age groups, not just in young people.

Although Ontario’s second wave of the virus was primarily detected among people between 20 and 39 years old, the experts said case growth is now occurring in all other age groups.

As of Sept. 28, more than 17,500 Ontarians between the ages of 20 and 39 have contracted the virus and over 14,632 people between 40 and 59 years old have tested positive since the beginning of the pandemic. Meanwhile, a total of 6,288 people over the age of 80 got infected with the virus and more than 4,100 people 19 and under also contracted the disease. 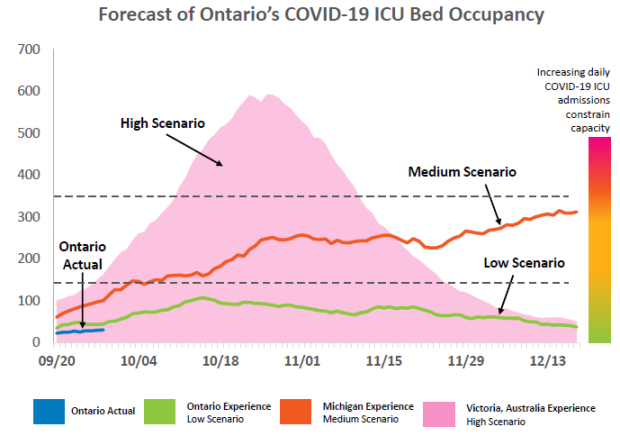 Risk to the healthcare system

With a current surge in cases, the experts warned about the risks to the healthcare system, particularly for intensive care units.

Currently, the health officials said that Ontario is almost trending at the same rate it did during the first wave for the amount of ICU beds needed for patients. This is considered a low risk scenario to hospital capacity in comparison to what other jurisdictions have seen.

On Wednesday, 150 people across the province were hospitalized with COVID-19. Of those patients, 35 were in the ICU and 17 were breathing with the help of a ventilator.

According to the modelling data, fewer than 150 patients in ICU will allow for hospitals to maintain normal non-COVID capacity and continue with all scheduled surgeries.

If ICU patients rise above 150, the experts said it will be harder to support non-COVID care needs, and at more than 350 ICU patients surgeries would become impossible.

“It’s really important that people understand that the trajectory is really a function of their behaviour and if the behaviour changes the trajectory of the disease will change and if it doesn’t then unfortunately we’ll start to look very much like the medium or high risk scenarios,” Brown said.