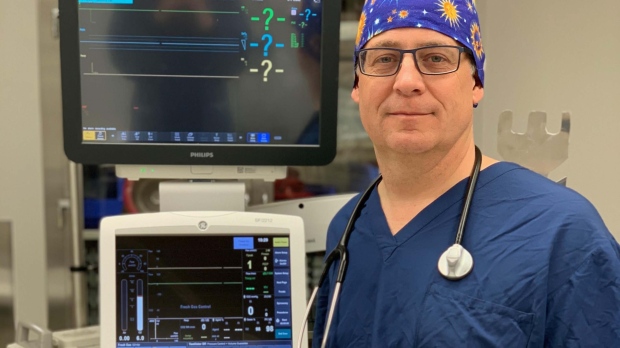 Dr Alain Gauthier is shown in a handout photo. Gauthier has improvised a way to double his rural hospital's ventilator capacity in preparation for a possible COVID-19 outbreak. THE CANADIAN PRESS/HO-Alian Gauthier

OTTAWA -- A doctor in Ontario has improvised a way to double his small hospital's ventilator capacity in preparation for a possible COVID-19 outbreak.

Anesthetist Dr. Alain Gauthier, who has a PhD in respiratory mechanics and works in Perth, west of Ottawa, spotted the idea in a YouTube video.

In basic terms, the rig involves pairing patients of similar size and lung capacity, and running two hoses from one ventilator running at double power.

Gauthier says the idea has been studied in theory and tried once before, for people injured in a mass shooting in Las Vegas.

He says his crafty work reflects similar efforts across the country as doctors try to get ready for the worst case scenario, if COVID-19 becomes widespread.