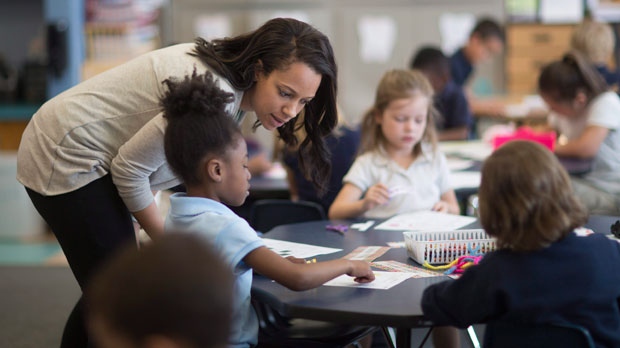 A file image of a kindergarten classroom is shown. (AP Photo/J Pat Carter)

Union leaders say they have not yet been given any details, but they expect to see cuts.

Sam Hammond, the president of the Elementary Teachers' Federation of Ontario, said he believes the government is looking to the education sector -- the second-largest spending area -- to help get rid of a multibillion-dollar deficit.

"(They're) putting their concerns and their focus on a deficit rather than focusing on the well-being and the long-term education, academic success and social success of students," he said.

The education ministry told school boards earlier this month to defer filling vacancies for retirements and other leaves for teachers and other staff until an update from the minister by March 15. It told the unions this week to expect information Friday on the upcoming school year.

Since the announcement is coming in the context of a hiring freeze, Laura Walton of the Canadian Union of Public Employees said she is not expecting good news.

"What we're expecting, more than anything, is more cuts that will lead to more chaos," she said.

The government has been consulting since January on class sizes and teacher hiring practices, including asking whether hard caps on class sizes should continue, and if they were removed, what would be an appropriate way to set effective class sizes.

Teachers have warned that removing primary class size caps would make it hard to meet all students' academic needs.

Currently, the kindergarten class size cap is 29 students, and the average of class sizes across any board can't be more than 26. For the primary grades the cap is 23 students, but at least 90 per cent of classes in any board must have 20 or fewer students.

For grades four to eight the maximum average class size in a school board is 24.5 and in grades nine to 12 the maximum board-wide average is 22.

In the context of that class-size consultation, Education Minister Lisa Thompson was also asked about the future of full-day kindergarten and would only guarantee it for another year, saying that she is committed to "full-day learning."

That consultation has also been looking at a supply teacher hiring rule that favours seniority.

The government has also been gathering feedback on a new sex-education curriculum, promising that a new one will be ready for the fall.

The Tories repealed a 2015 curriculum from the previous Liberal government that included lessons warning about consent, online bullying and sexting, as well as parts addressing same-sex relationships and gender identity.

Premier Doug Ford has been accused of promising changes on the sex-ed curriculum to appease social conservatives within the party's base.

Thompson has not specifically said if lessons on gender identity will be part of the new curriculum.

Friday's education update is also expected to contain changes to the math curriculum. Ford and Thompson have often talked of scrapping the so-called discovery math curriculum and "getting back to basics."

Discovery math does not focus on memorization of math problems that were traditionally taught in the classroom. Instead, it encourages students to engage in problem-solving that grounds math in its application.

Thompson is also expected to formally announce Friday that cellphones will be banned in classrooms during instructional time, starting next year, except for when teachers want to use cellphones as part of their lesson, for medical reasons and for students with special needs.