Ontario education workers have given their union a strike mandate. Here is what could happen next 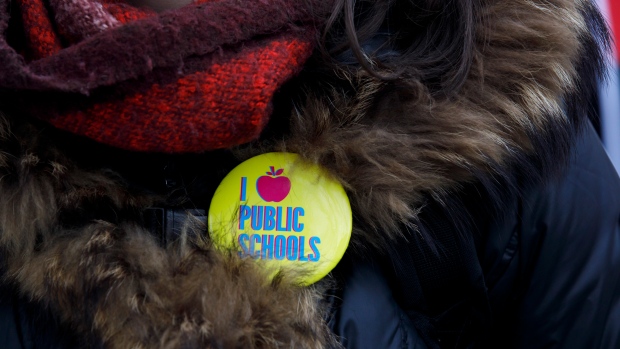 A button is seen as striking teachers of the Ontario Secondary School Teachers Federation picket outside of the Toronto District School Board head office on Yonge Street in Toronto, Wednesday, Dec. 4, 2019. THE CANADIAN PRESS/Cole Burston

Ontario education workers have voted overwhelmingly in favour of a strike if negotiations with the province continue to stall but many parents and school staff may be wondering what comes next.

On Monday, the Canadian Union of Public Employees (CUPE) announced that employees—including custodians, early childhood educators and school administration staff—voted 96.5 per cent in favour of the action.

So, what happens now?

A vote to strike does not mean that education staff will be on the picket lines straight away. Parents should not expect any immediate disruption in class activities or school schedules.

A strike vote is part of a process that will allow workers to legally take collective work action in the future. If negotiations end up in a stalemate, this gives CUPE the option to start a 17-day strike or lockout countdown in an effort to move bargaining forward.

The union must also give five days’ notice before starting any job action, including a work-to-rule campaign, a lockout or a strike.

The last time education workers negotiated their collective agreements with the Ontario government in 2019, a breakdown of a last-minute mediation resulted in a work-to-rule campaign. During the campaign, there was a partial withdrawal of services performed by support staff, including the cleaning of hallways, gyms and offices, as well as garbage pickup outside of school.

A five-day notice of a province-wide strike was issued a few days later, and a tentative deal was reached after some last minute negotiations.

The government is scheduled to sit down with the union again on Oct. 17 and Oct. 18. However, if no changes are made to wages in the offer, it is unclear if much headway will be made.

CUPE is asking for a wage increase of $3.25 per hour, or an annual increase of about 11.7 per cent. They argue that since salary increases have been capped at one per cent due to Bill 124 for the last three years, this kind of raise is necessary to keep up with inflation.

The government, however, has offered workers making less than $40,000 a year a two per cent raise and everyone else a 1.25 per cent raise for the next four years.

CUPE is also asking for 30 more minutes of paid preparation time each day, five additional paid days prior to the school year and an increase in overtime pay.

With files form Siobhan Morris and the Canadian Press