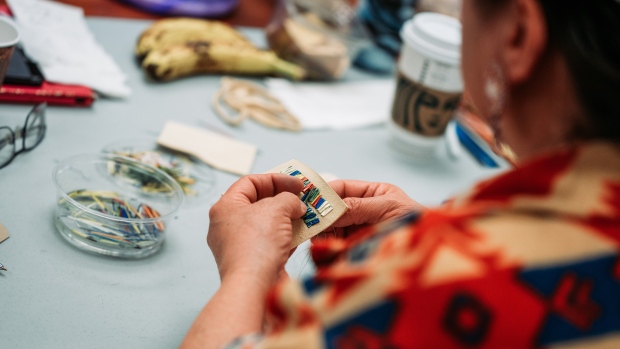 Participants take part in a porcupine quilling workshop at the Indigenous Arts Conference in Ottawa in this March 2019 handout photo. Ontario has eliminated an Indigenous Culture Fund as the government cuts tens of millions of dollars in arts funding -- a decision that is being slammed as short-sighted. Dawn Setford's Aboriginal Arts Collective of Canada received $25,000 and she used the money to hold a conference to teach about 200 Indigenous women various artistic and cultural practices such as porcupine quilling and basketry. Those types of traditional teachings were lost in some families, she said, because of residential schools or the '60s Scoop, which removed Indigenous children from their homes. THE CANADIAN PRESS/HO - Shrestharth Ghosh

TORONTO -- Ontario has eliminated a fund supporting Indigenous culture as the government cuts tens of millions of dollars in arts funding -- a decision that is being slammed as short-sighted.

The Progressive Conservatives are attempting to trim an $11.7-billion deficit and are cutting spending in a number of areas. That includes lower spending on tourism, arts and culture, according to recently released expenditure estimates for this fiscal year.

Culture programs are budgeted at $235 million this year, down from nearly $295 million last year, including cutting "arts sector support" from $18.5 million to $6.5 million.

Additionally, the Ontario Arts Council, which awards grants, is receiving $10 million less from the government this year -- with $5 million of that cut the result of axing the Indigenous Culture Fund that was only established last year.

The Aboriginal Arts Collective of Canada received $25,000 from the fund and president Dawn Setford said she used the money to hold a long-planned conference to teach about 200 Indigenous women various artistic and cultural practices such as porcupine quilling and basketry.

Those types of traditional teachings were lost in some families, she said, because of residential schools or the '60s Scoop that removed Indigenous children from their homes.

Setford now doubts she will be able to get other sources of funding to hold another conference.

"As Indigenous women we were just getting there, to the point where people wanted to learn about us ... and we're just at that point where we're confident enough, we feel safe enough and proud enough to start sharing," she said. "I think these kind of governmental movements renew in us the feelings that we're not valuable, that we're not equal again."

"That sends a terrible signal to our arts community that their work is not valued, their contribution to society is not valued," he said.

Tourism, Culture and Sport Minister Michael Tibollo said support for Indigenous communities continues through a number of other programs. On the overall arts funding cuts, he said the government needs to make sure its spending is sustainable.

"Prioritizing things that are really important -- education, health care, ending the hallway medicine -- there are so many issues we have to deal with that are critical to the wants of the people of the province," he said.

"I'm quite aware of the importance of (the arts) ... But I think we have to first make sure that we do what matters most to people and that's get control of the fiscal economy."

Kelly Saxberg, founder of the Vox Popular Media Arts Festival in Thunder Bay, Ont., which received $12,000 through the Ontario Arts Council, said the organization's grants are particularly beneficial for artists outside the major centres.

"Things precisely like the Ontario Arts Council are the things that are the positive things that bring us together, that help build community," she said.

Other cuts to the arts include slashing more than half of the Ontario Music Fund, from $15 million to $7 million.

The culture sector in Ontario supports 269,000 jobs and $25.7 billion in GDP, according to Statistics Canada.

Tourism funding has also been cut, with $17.5 million less going to regional tourism organizations across the province, including eliminating money for Tourism Toronto and Ottawa Tourism.

Funding to the Ontario Tourism Marketing Partnership Corporation, which promotes the province nationally and internationally as a destination, has been cut by $5 million to about $33 million.

A spokesman for Tibollo said the ministry is targeting funding to ensure maximum return on investment "through increased partnerships and efficiencies."

"That attracts visitors who spend money in our community, which creates jobs," Schreiner said. "So (the cuts are) very short-sighted from an economic perspective, but also just from a livability of our communities perspective as well."