Ontario extends deadline to opt into $10 a day childcare until Nov. 1

The Ontario government is extending the deadline for childcare centres to opt into the federal government’s $10 a day program by two more months.

Today, the province issued a letter to municipalities stating that the deadline has been extended from Sept. 1 to Nov. 1 to give childcare operators more time to decide if they want to join.

“We're following the overwhelming recommendations of childcare operators, overwhelmingly women-operated businesses and entrepreneurs, who said to us, ‘give us time to sign on,’ and we want them to stay on,” he added.

Many childcare centres have said they're hesitant to sign up due to possible impacts, including fiscal consequences, on their business and unclear guidance from municipalities.

Back in March, Premier Doug Ford’s government reached a $13.2 million childcare deal with the federal government, becoming the last province to do so.

The agreement will provide participating childcare centres with funding, and in turn, they will have to reduce fees by an average of 25 per cent immediately and then by another 25 per cent by Jan. 1, 2023. 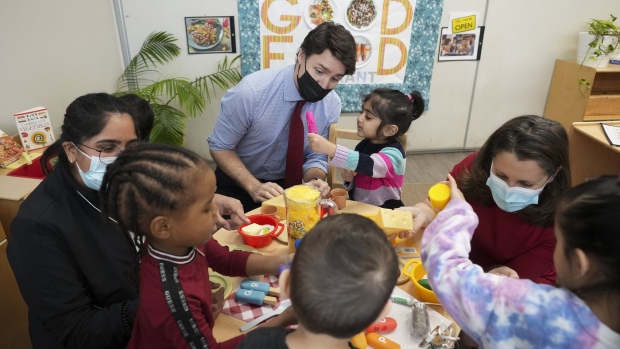 The goal is to have childcare fees further reduced to an average of $10 a day by 2026.

When the deal was sealed, Ontario parents were initially told they could start receiving rebates retroactive to April 1 as soon as this past spring.

However, the arrival of rebates will now be dependent on when operators get a stamp of approval on their application and receive funding.

In the government’s letter about the extension, obtained by the Canadian Press, the province says that municipalities will have to share an example of a standard agreement with all licensed childcare operators in their region by Aug. 29.

A senior source told the Canadian Press that operators who already opted out will be able to rethink their decision and choose to sign up before the new deadline.

“We think today's extension is going to help build the confidence of all operators to participate in what is really historic change to childcare delivery. This is not a small change. This is a profound change to how we're delivering affordable care and increasing access,” Lecce said.

The letter also says municipalities and operators have to execute an agreement within 30 calendar days of an application, down from the previous 60 days, and then provide parents with rebates within 20 calendar days of the childcare centre receiving the funding.

Lecce added that he hopes more childcare centres will consider participating to help families save thousands of dollars.

“I do believe we're going to see an increase (of centres joining) and I really hope that they participate and enroll because if they do so their clients will be able to save a lot of money. Thousands of dollars, they estimate $10,000 at maturity, we can literally save people a significant amount of money in the bank and so I really hope they will participate,” he said.

TORY CONCERNED ABOUT LACK OF CHILDCARE CENTRES OPTING IN

City data, as of last week, reveals that 535 of the approximately 1,000 licensed daycare operators in Toronto applied to opt into the program, while 28 had signalled their intention to opt out.

When speaking to CP24 Wednesday morning before the extension was announced, Mayor John Tory said some daycares are deciding not to join the program likely because of concerns that they won't be able to reduce fees to $10 a day with the level of funding provided.

“Yes, I'm concerned but at the end of the day it's an opt in or opt out thing and people have their choice, people meaning the daycare operators, and some of them are just choosing not to participate in the program,” he said.

The city says that approximately 444 of Toronto’s 726 non-profit centres have applied to join the program as of last week and only 91 for-profit operators had opted in.

Tory says it’s worrisome that some daycare operators aren't taking advantage of the program which will greatly benefit parents, particularly mothers looking to reenter the workforce.

“What that means is that of course those parents won't be able to take advantage of the opportunity to lower their fees substantially because they’ll still have to pay the higher fees," he said.

"And that is a concern because there were so many people struggling in our city to pay for childcare and also because we want broadened availability of cheaper childcare, more affordable childcare, to encourage, for example, more women to enter the economy."

However, the Executive Coordinator for the Toronto Community for Better Child Care says she is optimistic more centres will sign on now that they have more time.

“So centers have been trying to scramble to make sure that they can get everything together and get approval from their board so that they can sign on to the deal,” Abigail Doris told CP24 Wednesday afternoon. “And with the extension of the deal to November 1 Instead of September 1, I think we'll see a lot more centers signing on.”

With files from the Canadian Press and CP24’s Chris Fox