Ontario will once again limit COVID-19 testing guidance to those experiencing symptoms, vulnerable populations and contacts of known cases regardless of symptoms, in a bid to reduce ongoing lineups and backlogs.

The new guidance signals a complete reversal of provincial messaging over the summer, where Premier Doug Ford and others encouraged anyone who wanted a test to lineup and seek a test.

Ontario Health CEO Matt Anderson told reporters Thursday the move will free up testing capacity for those who really need it and those who queue up at an assessment centre who do not have any symptoms, no known contact with an identified case and are not part of a high risk group such as healthcare workers, cross-border workers or first responders will be turned away.

"We want to ensure we have the testing capacity for our priority populations. If you have no contact, no symptoms and are not part of a high risk setting, you're not getting a test now," he said. "Back in the spring this was our approach and we are going back to that model.  If activity diminishes we would be able to go forward again."

Associate Chief Medical Officer of Health Dr. Barbara Yaffe said she is confident the move to restrict testing will not impact her ability to track the spread of the virus.

"When we opened up testing to anyone who wanted it, we didn’t find cases," she said. Later she stressed that anyone who receives a contact alert from the COVID Alert smartphone app would be considered a contact of a case and would be allowed to continue to proceed to testing under the new guidance.

Both stressed the move to alter the guidance does not mean that no asymptomatic people will be tested, it just means that the practice of what Anderson called "reassurance testing," where people with no known symptoms or connection to any other discovery of the virus seek a test for peace of mind, will end.

"What we need to do is focus on symptomatic people and their contacts and outbreaks, in order to get the backlog down," Yaffe said. 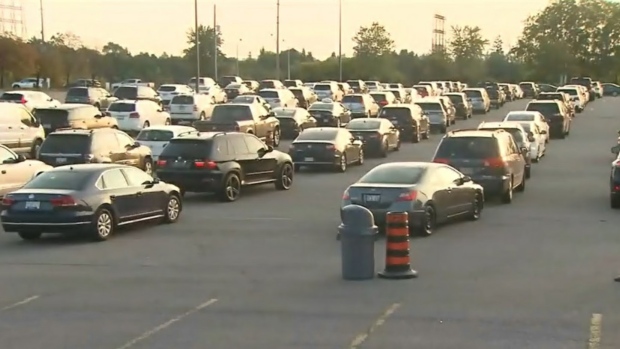 Yaffe said pharmacy testing would be suitable for those requiring a negative test before visiting a family member in long-term care for example.

Ontario's existing COVID-19 testing capacity has been overwhelmed by demand from people fearing infection during a steep rise in COVID-19 infection in the province. 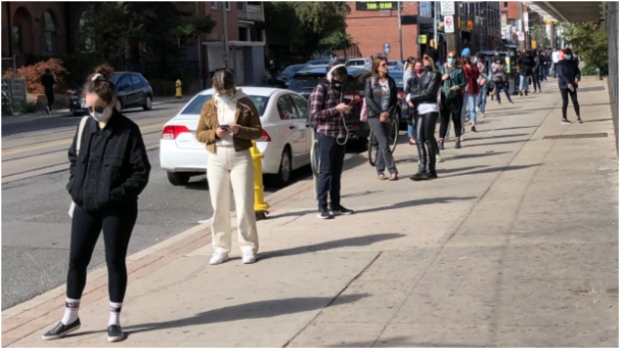 Lineups of up to seven hours were reported in Peel Region last week, prompting Ontario's Chief Medical Officer to suggest those who have no known contact with a case and no symptoms to perhaps hold off on asking for a test.

Demand for testing has also been driven in part by employees whose employers require a negative test in order for them to return to work after a respiratory illness, as well as children whose schools require the same before returning to class or being seen by a family physician.

The Ford government responded to the testing demand by increasing hours of service at its 140+ assessment centres around the province, as well as adding pop-up additional testing sites in areas such as Ottawa or Brampton.

Demand for testing has outstripped the ability to collect specimens and process tests.

On Wednesday, 48,000 test specimens were awaiting processing across the province, far exceeding the known maximum daily processing capacity of about 40,000.On Wednesday night, Public Health Ontario (PHO) reported a system outage that officials warned could delay some COVID-19 test results.

The outage, according to PHO, was resolved on Thursday morning and normal operations have now resumed.

Health Minister Christine Elliott has said the province will reach the ability to process 50,000 specimens per day sometime this month.

On Thursday, the backlog of specimens waiting to be processed hit almost 54,000.

Anderson said the efforts to ramp up testing capacity are running up against "global supply chain challenges," due to the fact that most of the world's jurisdictions are bidding to purchase the same supply of PCR testing equipment and reagent.

"We do expect that we will be in that range within the next couple of weeks," he said.

Later on Thursday, Premier Doug Ford announced up to $1 billion more to fund testing and contact tracing efforts in the province.

Yaffe said that the lineups and backlogs have so far not hampered public health officials' ability to track the spread of the coronavirus.

But without approved rapid testing equipment, he said the winter will be long and difficult, even with the new testing restrictions in place.

"The science is quite sound," he said of the tests, some which can produce a reliable result in an hour or less.

"There's really no reason besides bureaucracy and administration why we shouldn't have these tests now," he said. "It's simply not tenable so Health Canada really has to help us out here."

Meanwhile Ontario's opposition NDP pointed out that earlier this week, both Ford and Health Minister Christine Elliott urged asymptomatic people to get tested.

"Just yesterday, Doug Ford was telling Ontario about his so-called plan for asymptomatic testing, telling everyone to go get tested," Horwath said. "Today, the government says people will be turned away from testing centres if they are asymptomatic."

"No one disagree with prioritization, but Ontario should not have to ration tests and turn people away from testing centres."