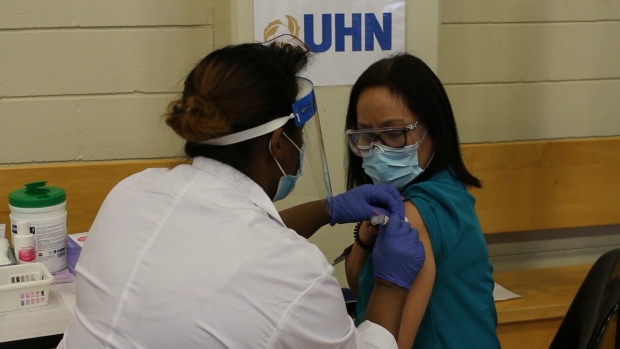 The Ford government is considering whether to delay administering the second dose of COVID-19 vaccines amid news that shipments of the Pfizer-BioNTech vaccine will be temporarily reduced due to production issues.

Health Minister Christine Elliott told CTV News Toronto that the province is looking at doubling the time between doses from 21 days to 42 in order to make sure that as many people as possible can be immunized.

Her comments come hours after federal officials confirmed that the expansion of the European plant where the Pfizer-BioNTech vaccine is being produced will result in expected shipments being reduced by up to 50 per cent over the next four weeks.

"The National Advisory Council on Immunization (NACI) has said up to 42 days between the doses is acceptable and is safe," Elliott told CTV News Toronto in an interview on Friday. "It would be within Ontario's power to extend the doses up to that time."

Canada had expected to receive between 124,800 and 366,600 Pfizer doses every week between now and the end of February, so the slowdown could have a significant impact on how many people can be immunized in the coming weeks.

In her interview, Elliott said that the province is still awaiting further details on the "the exact allocations" and the "timing of those allocations" but she confirmed that it will return to reserving vials of the vaccine to make sure people who receive their first dose can get their second.

"We have some in reserve to make sure that we are going to be able to do the second doses in the appropriate period of time. So no one needs to worry about whether they will get their second dose or not,” she said.

The National Advisory Council on Immunization has said that the second dose of the vaccine should ideally be administered between 19 and 28 days after the first. But they did amend their advice to provinces and territories on Thursday, noting that they can wait up to 42 says to administer the second dose of the Pfizer/BioNTech and Moderna vaccines.

In a statement issued on Friday, Premier Doug Ford said that the province is “evaluating the impact of today’s news that there will be a delay in Pfizer vaccine shipments” and “will adjust as necessary.”

With files from Colin D'Mello