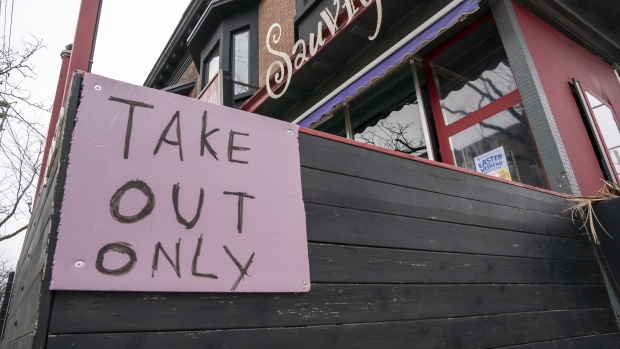 A restaurant in Toronto displays a "Take Out Only" sign on March 18, 2020. THE CANADIAN PRESS/Frank Gunn

TORONTO - The Ontario government is putting a temporary ban on commercial evictions to help small business owners who are struggling to pay their rent amid the COVID-19 fallout.

Premier Doug Ford announced the moratorium on Monday which applies to small businesses who qualify for the Canada Emergency Commercial Rent Assistance program (CECRA), where their revenues have dropped at least 70 per cent due to the pandemic.

Ford outlined the details at a news conference, saying the ban will take effect for evictions as of June 3 and last until Aug. 31.

The province's emergency commercial rent program launched in April to help small businesses pay their landlords, but it relied on the landlords themselves to apply, leaving the tenants hanging in the balance if they didn't.

“I was clear with commercial landlords - you have to be fair and help out everyone,” Ford said.

“But we still heard about some landlords who just didn't get the message.”

Some landlords have said they weren't interested in covering part of their tenant's rent as part of the CECRA program, either because the application process was too difficult, or they didn't want - or couldn't afford to - swallow the 25 per cent loss that would come from a program that supported 75 per cent of the rent owed.

Dan Kelly, president of the Canadian Federation of Independent Business, said the temporary ban on evictions was “a long time coming and took a lot of convincing” in the ranks of the provincial leadership.

His organization was among five business groups that co-signed an open letter in May calling for the Ontario government to move swiftly to support many small and medium-sized businesses who were in danger of missing their June rent payments.

“Hopefully (the halt) will now motivate more landlords to participate in the CECRA program, which has been a real mess in the absence of commercial eviction protection,” Kelly said.

Ontario now joins British Columbia, New Brunswick, and Nova Scotia as provinces that have implemented some form of a commercial eviction ban.

“There's no excuse for Ford's failure to act while businesses were going under and workers were being laid off,” she said in a statement.

“Now, the protection is too restricted...business owners need a broader ban on commercial evictions, plus some direct supports to help them make it to the other side of this pandemic.”

Toronto mayor John Tory said the ban on commercial evictions is the sensible “next step” in protecting businesses in the city.

“Removing any worry of being evicted during these difficult times will help allow businesses to stay open as we transition into the reopening phase of this pandemic,” he said in a statement.