Ontario reported a new milestone in its COVID-19 vaccination effort Thursday, logging more than 140,000 doses administered in a single day for the first time.

The federal government published a vaccine distribution schedule weeks ago indicating that Pfizer would ramp up its deliveries drastically starting this week and the company appears to have delivered.

Ontario is scheduled to receive close to 800,000 Pfizer doses per week through to the end of May and that figure is set to rise to around 940,000 doses per week in each week of June.

The influx of vaccines has prompted an expansion of eligibility in Ontario.

Those 50 and up are now eligible to book a vaccination appointment across the province, while all eligible people 18 and over in hot spots can now book.

The province is also rolling out mobile vaccine clinics to large workplaces in the GTA, which have been a significant source of transmission during the third wave. 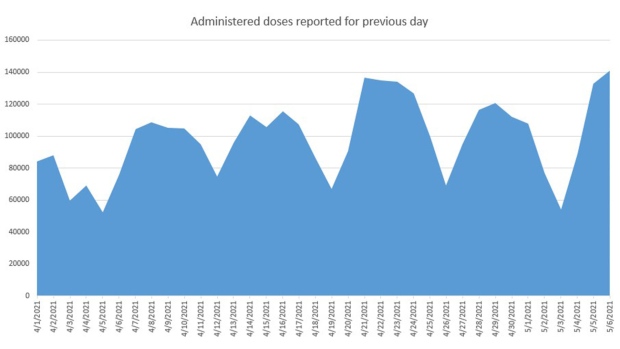 On Wednesday, the province projected that 65 per cent of Ontario adults will have received a first shot of a vaccine by the end of May.

At the moment, Ontario is spacing jabs of all two-dose vaccines about four months apart to try and extend some protection to as many people as possible. However officials have said that people might be able to access second doses sooner if the province continues to receive steady increased shipments.

Other vaccines could boost numbers faster, but deliveries unclear

Ontario's vaccination effort has also been buoyed in recent weeks by loosened restrictions around the use of the AstraZeneca vaccine.

On April 23, Canada's National Advisory Committee on Immunizations provided updated guidance suggesting that AstraZeneca be made available to all those 30 years of age and up.

Ontario has been offering the vaccine to those 40 and up through pharmacies and doctors’ offices since April 20 and has seen a drastic uptake of the vaccine since making the change. The province has said that it will not lower the age until there is greater supply available.

At the same time that NACI updated its guidance around AstraZeneca, the committee raised eyebrows by saying that mRNA vaccines such as those produced by Pfizer and Moderna are "preferential,” muddying previously clear advice that people should take the first vaccine that they are offered.

The new guidance caused a stir again on Monday when NACI said the same thing in the context of its guidance around use of the Johnson and Johnson vaccine, of which a limited supply has now arrived in Canada.

The federal advisory committee said it was labelling the mRNA vaccines as preferred because of the absence of a safety signal and their general acceptance by the Canadian population.

Both vaccines produced by AstraZeneca and Johnson and Johnson have been linked to rare blood clots that have been fatal in a handful of cases.

However a number of public health officials have criticized the committee for its guidance, saying all of the vaccines are effective in preventing death and serious illness caused by COVID-19 and that the blood clot risk associated with the two vaccines is still far lower than the risks associated with COVID-19 itself and that associated with everyday activities such as air travel and the use of birth control.

Debate around who should receive the two vaccines may be moot for now, however. Federal officials have said that they are working to bring more doses into the country, but it is unclear when exactly that might happen.

Maj.-Gen. Dany Fortin said Thursday that Canada will be getting another 655,000 doses of the AstraZeneca vaccine through the COVAX program by the end of May and that discussions continue with the United States about accessing more of their stockpiled AstraZeneca doses through a further loan program.

Federal Procurement Minister Anita Anand has said that 4.1 million doses of the AstraZeneca vaccine are expected to arrive in Canada from various sources by the end of June, but no delivery schedule has been published.

The federal government has not yet published a delivery schedule for the Johnson and Johnson vaccine, the only single-shot vaccine approved for use in Canada so far.