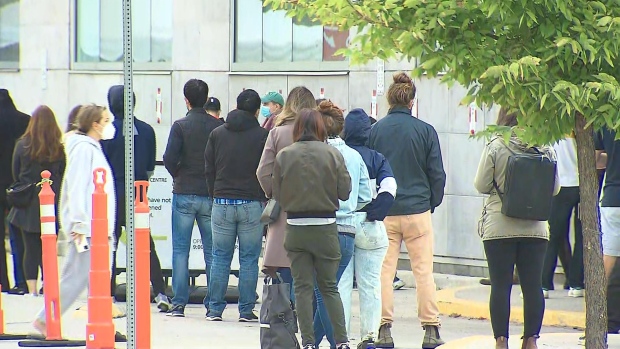 A large line is shown outside a COVID-19 testing centre at Women's College Hospital on Tuesday morning.

Health Minister Christine Elliott says that Ontario is working to ramp up its testing capacity amid recent reports of long lineups at COVID-19 assessment centres with the goal of consistently turning around 50,000 specimens a day “within a month or so.”

Earlier in the pandemic the province was stuck at around 5,000 tests a day, a rate that put them last in Canada on a per-capita basis.

The Ford government has, however, significantly ramped up testing since then and for the last several months its labs have regularly turned around more than 25,000 tests each day.

Speaking with reporters during a briefing at Queen’s Park on Wednesday, Elliott said that the province is now “actively working” at increasing its testing capacity again with the goal of hitting 50,000 a day by sometime in October.

Her comments come as lineups continue to get longer and longer at assessment centres in the GTA with some people reportedly waiting up to three hours just to get a swab for COVID-19 and others being turned away entirely.

“We don’t have a definite date for it but we are actively working towards that with Ontario Health. But of course you have to have the testing and the labs working in tandem because it is not worth much if you can have a test done in a short period of time but it takes you four days or a week for the results to come back,” she said. “So we are moving forward with both of them. Ontario Health is reaching out to other partners in the community that can help us with increasing the lab tests as well.”

Premier Doug Ford has called the lineups at assessment centres “ridiculous” but has indicated that his government will address them through a soon to be announced partnership with major pharmacy chains that will allow asymptomatic Ontarians to get a COVID-19 test at “thousands” of additional locations.

Meanwhile, Elliot said that as Ontario heads into flu season and more residents develop symptoms that could be related to COVID-19 there will also likely be an increased demand for testing, hence the need to boost as well.

“We have the supplies for it and we are ready to move forward,” she said.

Ontario has conducted more than three million individual tests since the beginning of the pandemic and in recent days has reported a positivity rate hovering around one per cent.