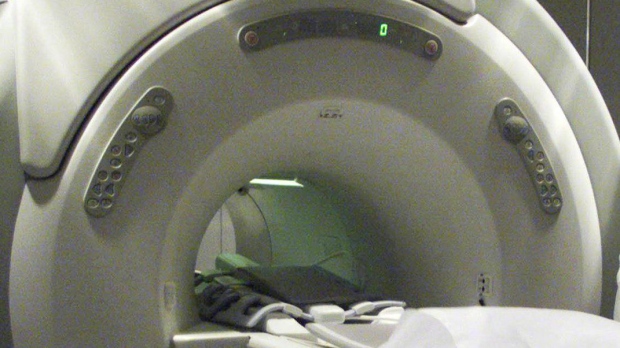 An MRI machine is seen at a clinic in Calgary on Nov. 28, 2002. A global shortage of contrast dye has forced some Ontario hospitals to limit or postpone certain diagnostic imaging scans. THE CANADIAN PRESS/Adrian Wyld

A global shortage of contrast dye has forced some Ontario hospitals to limit or postpone certain diagnostic imaging scans.

Windsor Regional Hospital says it expects just half of its usual shipment of iodinated contrast dye in the coming weeks, and is not booking any new non-emergency CT, cardiac angiograms and diagnostic studies until at least the end of June.

It says "all hospitals in Ontario" have developed mitigation strategies to ration the solution after a major international supplier temporarily closed its main Chinese plant amid COVID-19 concerns and is still ramping up production.

"The hospital will contact patients whose upcoming appointments are impacted by the rationing of contrast dye use," according to a statement issued Saturday.

Bluewater Health, which includes southwestern Ontario hospitals in Sarnia and the town of Petrolia, said Tuesday it also expected half of its usual supply but would manage by using other imaging methods that don't require the contrast dye.

It added that the issue has not impacted ultrasounds, X-rays or MRI exams with contrast, and that it "is not significantly affecting appointments."

The global shortage affects hospitals supplied by GE Healthcare's manufacturing site in Shanghai, which was closed for several weeks by COVID-19 policies in China. GE has three other manufacturing sites, including a plant in Cork, Ireland that expanded production to help cover the shortfall.

The plant in China reopened to 60 per cent capacity May 21 but it's expected to take several weeks for production to reach full capacity.

A spokeswoman for Toronto's North York General Hospital said it was "exploring if there are other supply options."

"Like hospitals across Ontario, this shortage will have some impact at North York General and we are working to minimize any impact to patient care," Anne-Marie Flanagan said in an emailed statement.

"This includes changing some of our imaging protocols to reduce or avoid the use of IV contrast while working to ensure that there are no negative impacts on quality and access to CT imaging."

Bluewater's medical director of diagnostic imaging said it was intent on ensuring patients were not adversely impacted.

"Locally, we are managing our supply by taking steps to limit our usage where possible and will continue to assess as we gain more insight on the shortage," Dr. Youssef Almalki said in a release.

A statement from Toronto's University Health Network, which includes the Toronto General and Toronto Western hospitals and the Princess Margaret Cancer Centre, said it was not experiencing the same supply strain since it gets its contrast dye from Bayer.

However, it acknowledged that the shortage could cause secondary strain if it increases demand on rival manufacturers.

"This means that many places are looking to Bayer as the source for contrast, which may affect everyone should the supply issue continue with GE," UHN said in a statement.

This report by The Canadian Press was first published June 1, 2022.