The provincial government is implementing new restrictions to curb the spread of COVID-19, including a policy making it mandatory to wear a mask in any workspace or indoor setting in Ontario where physical distancing cannot be maintained.

“We are expanding the masking policies already in place in many communities to the entire province,” Premier Doug Ford said at a news conference Friday. “That means wearing a mask when shopping, when taking public transit, and when at work if you can't keep two meters between you and your colleagues.”

As of 12:01 Saturday, restaurants, bars and nightclubs in those regions can have no more than 100 customers at a time and no more than six people at a table. They will also have to collect contact information from every diner or patron.

Toronto Public Health has already imposed a venue capacity of no more than 75.

Banquet halls and other meeting and event facilities will have to limit capacity to 50 people per facility rather than 50 people per room, as was previously allowed, and there cannot be more than six people seated at a table.

At gyms and fitness centers, group exercise classes will be limited to 10 people and the facility must limit its overall capacity to 50 people or less.

“My friends, this is serious. We have to offer our full support and every power possible to help the healthcare sector fight the second wave,” Ford said. 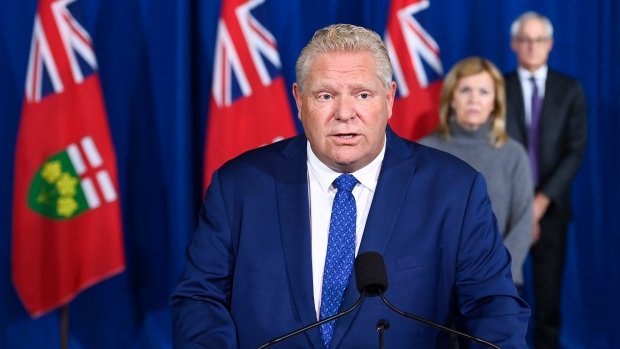 The new policies come amid a second wave of COVID-19 that has seen cases spike dramatically in recent weeks. On Friday morning, the province announced a record single-day increase of 732 new cases of the virus in Ontario. The new number beats a previous record of 700 cases that was set just days ago.

Long waits have been reported at provincial testing centres recently and there have been reports that some centres have turned away walk-ins early in the day because they have already reached their testing capacity.

The province is now also asking people to limit close contacts to people they live with rather than expanded social circles or bubbles, especially in the context of the upcoming Thanksgiving holiday and Remembrance Day.

“We are seeing more and more positive cases and we need to take action to break this trend and ensure we can keep Ontarians safe,” Health Minister Christine Elliott said. “To do that we need to take hard but necessary measures.” 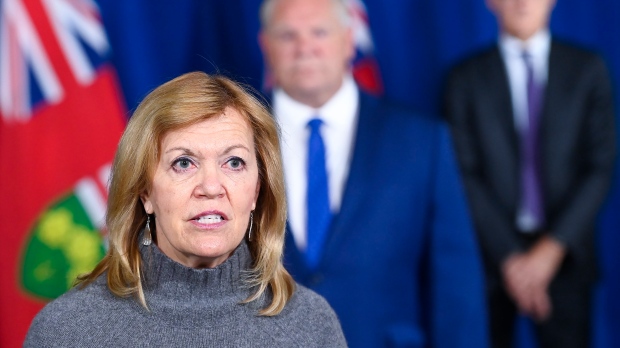 Elliott said the new measures are being implemented at the urging of local public health units as they watch case numbers balloon.

“We received a letter from the medical officer of health for the City of Toronto requesting these measures, echoing the concerns we've been hearing from many other public health units across the province,” Elliott said. “We are working closely with the city as we are with all of our partners in public health to address these concerns.”

Toronto’s Medical Officer of Health Dr. Eileen de Villa had requested even tougher measures, such as halting all in-restaurant dining. De Villa advised Torontonians Friday that they should only be leaving home for essential trips.

The province has so far resisted the idea of moving back to full shutdown phases, such as those imposed in the early months of the pandemic. However a surge in cases has resulted in calls from a number of groups, including the Ontario Hospital Association, to do so.

Provincial health officials have said that they would first try to target problem facilities and gatherings before imposing full shutdown restrictions again.

Elliott said Friday that while the province is trying to keep the economy running as much as possible, implementing the new measures to reduce the spread of the disease is essential to preventing a strict shutdown.

“We need to take these very necessary steps to protect our economy, to protect our schools, and to keep everything open so that people can continue to earn a living,” Elliott said. “The reality is that these measures are necessary to protect the health and wellbeing of Ontarians and of course to prevent future lockdowns.”

“These are still the best methods for stopping the spread of this virus and for protecting ourselves, our families, our friends, and our neighbors,” Elliott said.